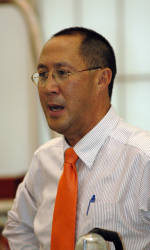 CLEMSON, SC – Clemson Swimming and Diving Head Coach Christopher Ip has announced a nine-member class for the early signing period. Ip and his staff have put together a class that includes recruits from five different states, State Champions, All-Americans and an Olympic Trial Qualifier.

“We are extremely happy with our early commitments to Clemson and welcome their families into the Tiger family,” Head Coach Christopher Ip said. “We expect each of these swimmers to reach their academic and athletic goals senior year and be prepared to step onto Clemson University campus as impact players for our program.”