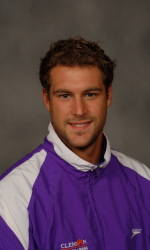 Swimmers Wrap Up at Olympic Trials

Six Tigers competed for a spot on the USA Swimming Olympic Trials in Omaha, NE during the past week in various events. While none of the Tigers qualified for the squad, most of the Tigers drastically improved their standing among the US’s elite swimmers. Four of the competitors will be returning to Clemson, while two others have graduated.

Below are the individual student-athlete results from Omaha:

Rachel Regone – Senior – Houston, TX 50 free: Sat. July 5: 56th – 26.27 Senior Captain Rachel Regone competed in the 50 free, finishing 56th in a fast field. Lara Jackson set an American Record on the evening. Regone’s 26.27 was the second-fastest time in her career. Regone returns to Clemson as a school record holder in the 50 free and 200 free relay.

Matt Balderston – Clemson ’08 – Chesapeake, VA 50 free: Fri. July 4: 47th – 23.10 – Lifetime Best May graduate and 2007-08 captain Matt Balderston competed in the 50 free on Friday, swimming a lifetime best 23.10. Balderston came in to the event ranked 112th in the nation, but shaved 0.38 second off of his time to place 47th in a race in which Cullen Jones set the new American record at 21.59. The former walk-on left Clemson as one of the most accomplished student-athletes in Clemson history, with numerous academic and athletic accolades.

Stephen Russell – Clemson ’08 – Spring, TX 100 fly: Fri. July 4: 47th – 54.64 – Lifetime Best Another May graduate, Stephen Russell, qualified for trials with a 54.85 in the 100 fly at the Charlotte UltraSwim. Russell was ranked 51st in the nation, but his lifetime best 54.64 was good enough to move him up four spots. World Record-Holder Ian Crocker and gold-medalist Michael Phelps led the field of 107 swimmers into semifinals.