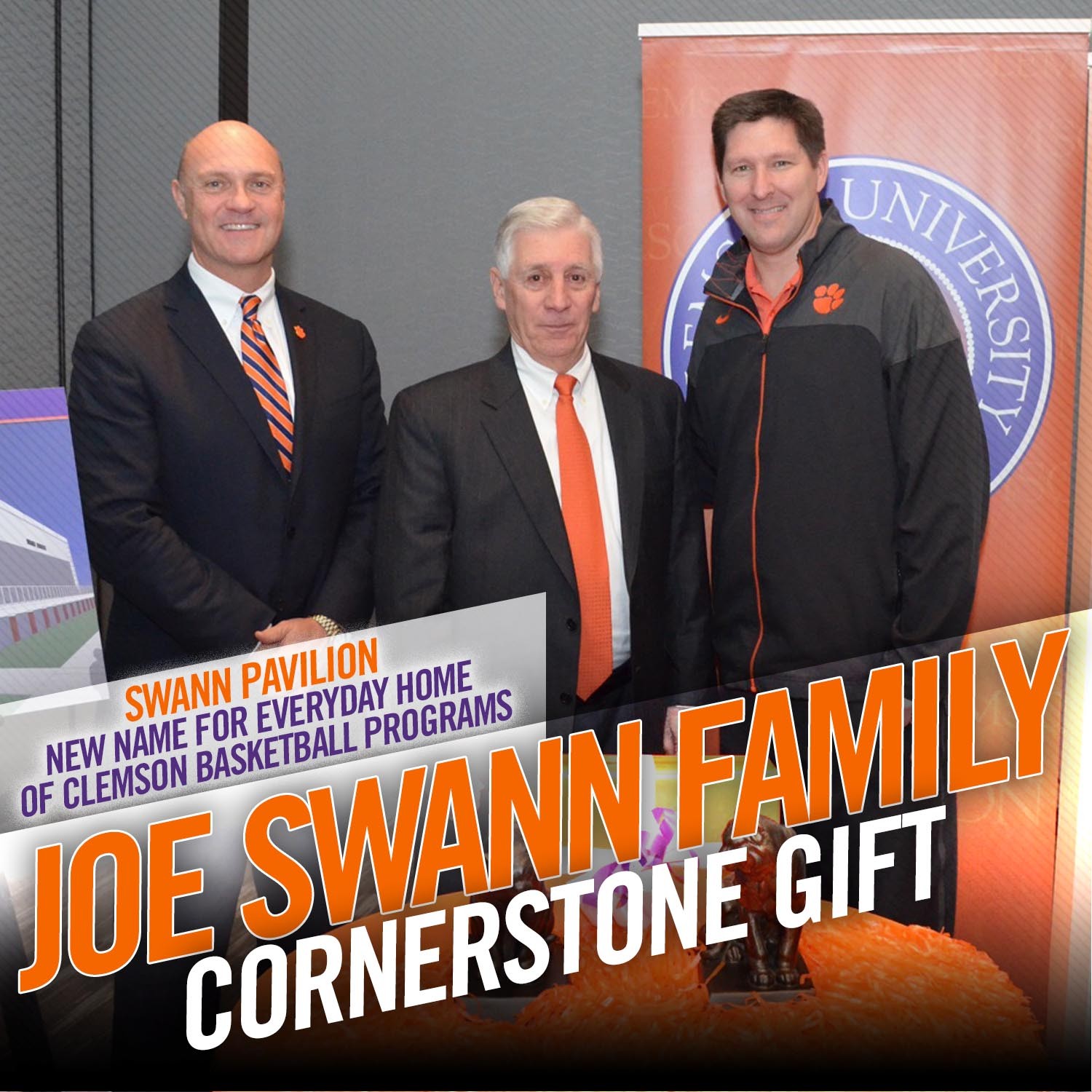 Clemson Class of 1963 alumnus Joe Swann has been a lifelong supporter of his alma mater, and recently he and his wife Barbara Ann “Bobbi” Swann provided a Cornerstone Gift of $3.3 million to athletics. Pushing his lifetime giving total near $5 million, Swann joins fellow Board of Trustees member Bill Hendrix, along with Betty Poe and an anonymous donor in their support of Clemson Athletics’ facilities projects.

In recognition of the Swann family donation, the new addition to Littlejohn Coliseum housing practice court, locker rooms and coaches’ offices – the everyday home of the basketball programs – will be named Swann Pavilion.

Mr. Swann’s history of philanthropy to the university includes The Swann Fitness Center on campus named in family’s honor, and an endowment of the men’s soccer coaching position. He was a leader of his class and their gift of $1,000,000 to name the Class of 1963 Bridge to Clemson Program.

“Joe Swann has always been an outstanding leader for Clemson beginning with his student days at Clemson when he served as class president,” said President James P. Clements. “Joe and Bobbi and their children have given incredible support to the university. I am grateful for everything they have done for academics, student life and athletics. Clemson is a special place because of people like Joe Swann and his family.”

The Clemson Athletic Cornerstone Program is a vital part of the new athletics facilities initiative. With new facilities, upgrades or rebuilds planned for football, basketball, baseball, tennis, soccer and Vickery Hall, it will be the most comprehensive change to the facilities of athletics ever undertaken at Clemson.

“We can’t thank Mr. Swann and his family enough for their support of our program,” head basketball coach Brad Brownell said. “I know this first-class facility will be a difference maker for our student-athletes and we’re honored to have the Swann family name on the home of Clemson basketball.”

“We’re tremendously appreciative of this outstanding contribution to our athletics facilities projects, and very happy that the everyday home of our basketball program will be known as Swann Pavilion,” Director of Athletics Dan Radakovich said. “Trustee Swann and his family have been great supporters of our student-athletes and this gift will continue to enhance their experiences as Clemson Tigers.”

Mr. Swann grew up the son of educators in the small town of Clio, S.C. In 1963, he earned his BS degree in ceramic engineering at Clemson University and in 1969 earned an MBA from Case Western Reserve University.

Upon graduation, Mr. Swann was employed as a development engineer for Ferro Corporation in Cleveland, Ohio and over time became division materials manager. In 1969, he accepted employment with Reliance Electric Company and had the opportunity to contribute with two stints in Cleveland and one in Athens, Ga. In 1974, he became plant manager of the Reliance Plant in Stone Mountain, Ga., and in 1976 became plant manager of a new motor plant in Gainesville, Ga. In 1981, Mr. Swann became vice president and general manager of the Dodge Business of Reliance Electric. In 1995, Reliance was acquired by Rockwell Automation and in 1998 he became president of Rockwell Automation Power Systems and senior vice president of Rockwell Automation. He retired from Rockwell in 2007 and spun- off a motor and generator repair business with the help of the Riverside Company, a private equity firm headquartered in Cleveland and New York City. The business was later called Integrated Power Services (IPS) where Mr. Swann served as non-executive chairman. IPS was sold in 2012. Since then he has given much of his time to assisting entrepreneurs in the Greenville community and continues to serve on numerous boards.

Joe Swann is married to Barbara Ann “Bobbi” Porch who is a graduate of Ohio University. Bobbi and Joe have three children all of which are Clemson graduates; Erin ‘92, Audrey ‘95 and Ted ‘97. The Swanns have nine grandchildren.