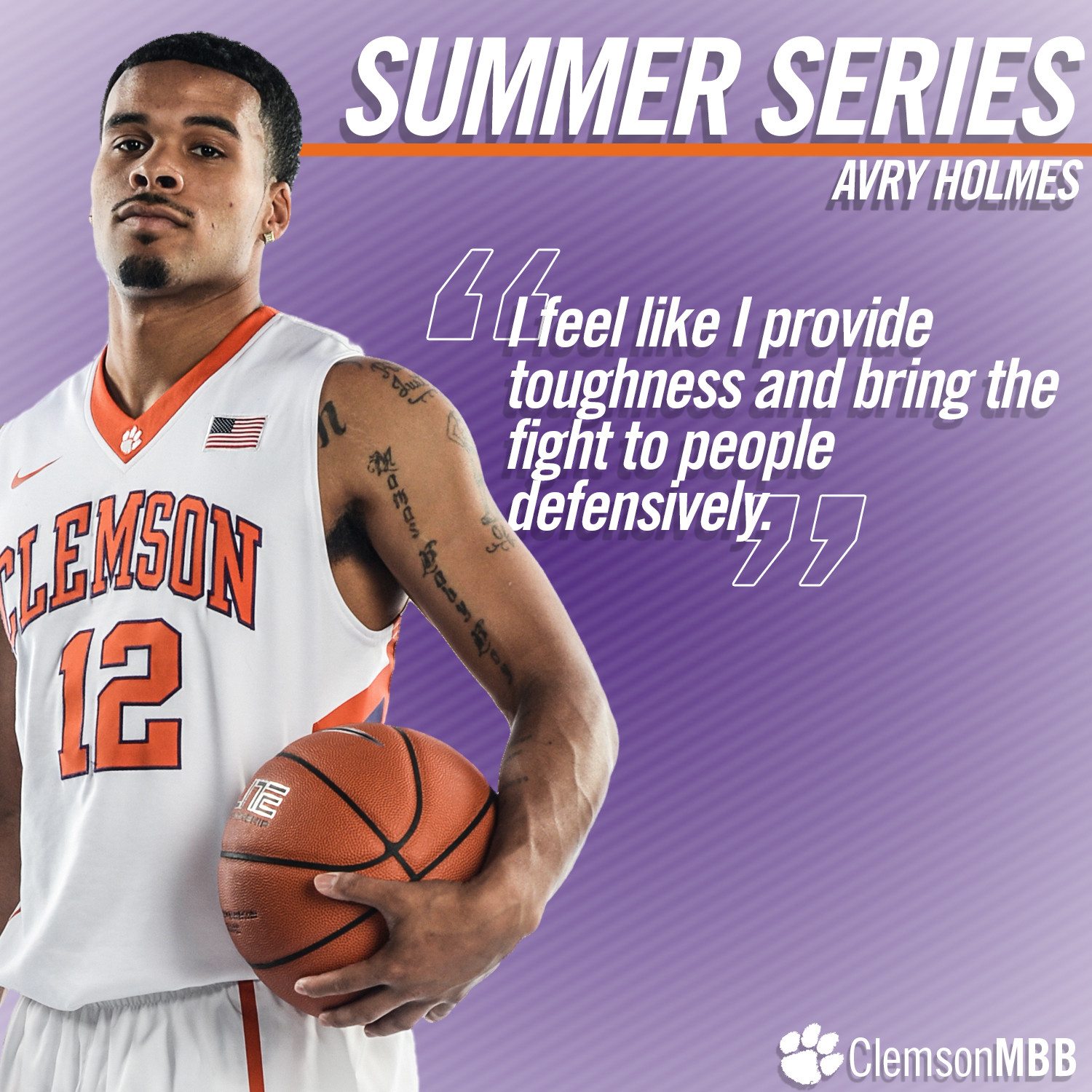 Note: This is the third installment in a series of articles looking at the offseason focus for Clemson’s men’s basketball players.

One by one, head coach Brad Brownell took turns introducing his current players on the first day of Clemson’s basketball camp this summer in Fike Recreation Center.

When it came time to introduce senior guard Avry Holmes, Brownell said, “This next guy might be our toughest guy.”

Then he turned to Holmes and promptly asked him in front of over 200 campers, “Are you our toughest guy?”

Holmes offered an approving nod, despite several teammates poking fun at him. But in talking to Holmes and his coaches, there’s an overwhelming sense that Brownell’s statement is spot-on.

“Avry has impressed me with his willingness to be physically tough on the court,” said Dick Bender, assistant coach who works with the Tiger guards. “He has consistently shown grit and determination on the defensive end by guarding the opponents’ best perimeter player in a way that disrupts their offense.”

Holmes proved to be a leader on that end of the floor last season, when he gained a reputation as one of the ACC’s best on-the-ball defenders. He finished with 35 steals — second on the team — but more importantly, he took away the top scoring option on several teams.

His most noticeable defensive effort came at NC State, where he took 100 percent of the responsibility of guarding Wolfpack point guard Cat Barber, a first-team All-ACC player and the league’s leading scorer. Barber finished with just eight points, mustering only one field goal in 12 tries.

“I think I provide toughness and bring the fight to people defensively,” Holmes said. “I hope I showed that I can be a lockdown defender, by taking on some of the biggest assignments every game.”

Holmes is quick to credit his toughness as a player to his childhood, where he grew up in Oregon as the youngest of three brothers.

“They literally would make me go from neighborhood to neighborhood playing one-on-one,” Holmes said. “In those days, I had anger issues. People would talk so much junk to me if I lost. I’d want to keep playing until I won. We got in fights, too, so it was serious.”

The fight continued for Holmes after transferring following two seasons at the University of San Francisco. He heard the doubts about his ability to play in the ACC, one of the country’s most revered basketball leagues.

It fueled him in his first season on the court in 2015-16, when he averaged 10 points per game and was second on the Tiger team with 80 assists and 50 three-pointers.

“Opponents would always say, ‘Now you know what it’s like to be in the ACC,’” he said. “But really, I was just getting used to Coach Brownell’s system. It helped me to hear mid-major this, mid-major that. (My teammate) Marcquise (Reed) went to a mid-major, but he still gets buckets all the time. It doesn’t really matter; if you can play, you can play.”

Holmes showed that he could play in year one, and is looking forward to what year two of playing under Brownell will bring.

With former Vanderbilt guard Shelton Mitchell likely seeing the bulk of time at the point guard position, it offers Holmes the opportunity to see more time off the ball in 2016-17.

“Communicating with Shelton and Marcquise comes easy,” Holmes said. “I think the ball movement will be a lot better. Playing off the ball will be much better for me as well. I forced shots last year. My legs were tired at times because of the energy I expended defensively.”

There’s little doubt Holmes will again be tasked with Clemson’s biggest defensive assignment, but Bender believes the scrappy player is more than equipped to carry his share of the load.

“The value of Avry’s overall physical toughness on the court as a lead guard is immeasurable,” Bender said. “He helps give our team strength and a presence needed to win at a high level. As a senior, Avry is ready to lead our team by helping improve our tough mindedness on both ends of the court.”