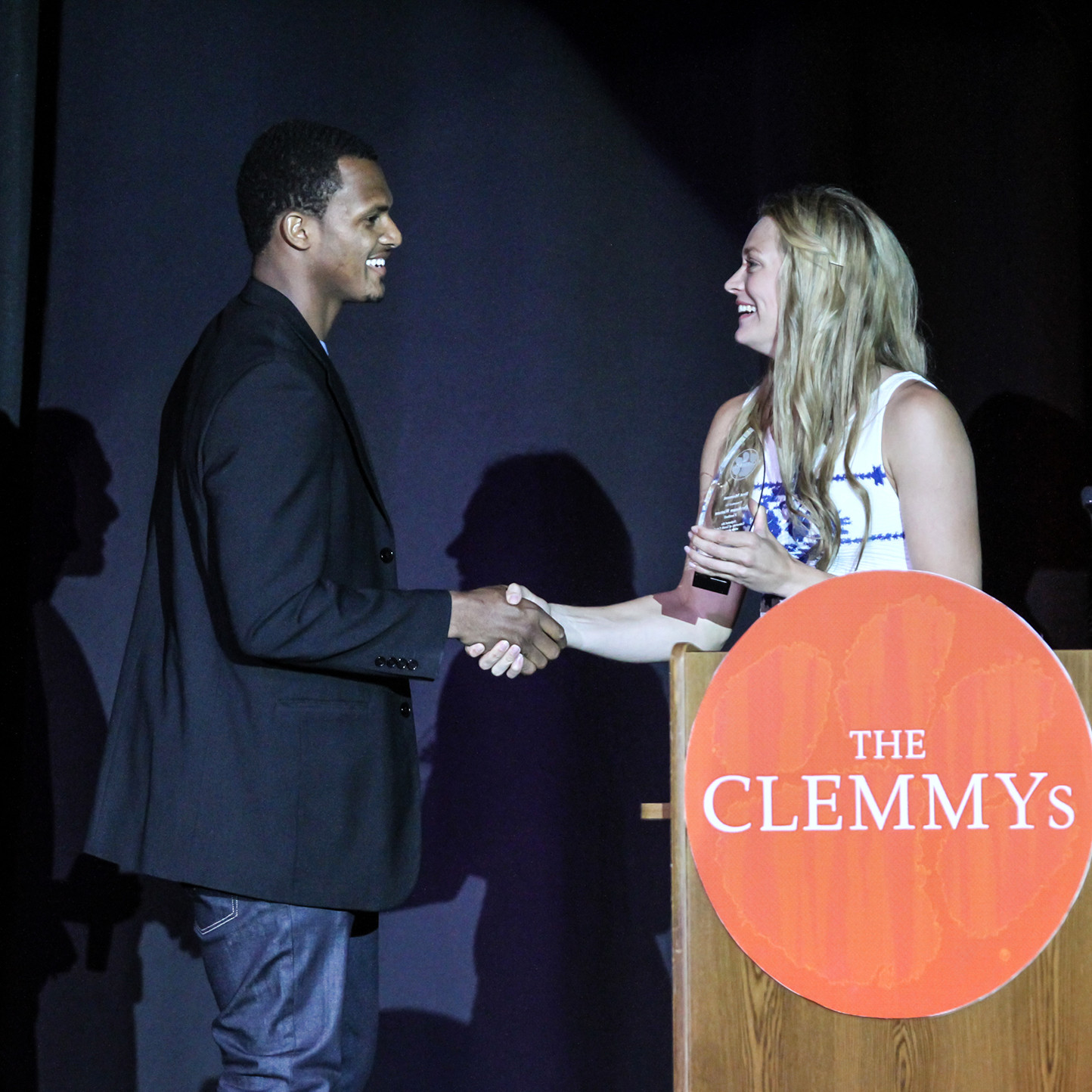 The third annual CLEMMYs award banquet held in Littlejohn Coliseum on Monday night brought the  Clemson athletic department together to honor the achievements of Clemson student-athletes and support staff from the spring 2014 semester through March 1, 2015. The more than 500 members of the Clemson family gathered in Littlejohn Coliseum Monday night to see who would win coveted awards, such as Male and Female Athlete of the Year, Solid Orange Athletes of the Year and Rookie of the Year as well as numerous academic and community service awards.

The CLEMMYs are a night to celebrate Clemson’s student-athletes’ numerous achievements but it’s also a time for the Clemson athletic family to get together and celebrate another successful year. The senior student-athletes specifically appreciated the time to gather with teammates, friends, coaches and support staff.

Volleyball senior Karis Watson, who flew back from her internship at Disneyworld just for the event, said, “the CLEMMYs are the last time every year that we all get together as a family and it means a lot to me because it will be the last time this group of athletes, especially my team, will be together.”

Furthermore, when asked about what the CLEMMYs mean to him, football senior Jim Brown said, “It’s a great experience to come here with all the other student-athletes. I think it really shows how together the student-athlete population at Clemson is and how we all are one body.”

The CLEMMYs began with some of Clemson’s international athletes welcoming the audience in their native languages. Then, President Jim Clements welcomed the audience via video and congratulated the student-athletes on their impressive athletic and academic achievements. Clemmy’s hosts JDew and former track and field star Tony Wheeler opened they show with an entertaining monologue. To round out the welcoming committee, Director of Athletics Dan Radakovich took the podium and spoke about how proud he was of all Clemson student-athletes saying, “this night is for you. Sit back, enjoy it and have some fun.”

The CLEMMYs primarily encompass four different categories: academic, athletic, community service and a combination of all three. Numerous student-athletes were honored for their incredible hard work and determination in the classroom. Student-athletes who made the academic honor roll for seven straight semesters and the student-athletes with the highest GPA’s on each team were honored. Also the Clemson athletic teams with the highest GPA’s for the 2014 spring and fall semesters were honored. The women’s tennis and men’s tennis teams posted the highest GPA’s for the spring semester and the diving and men’s cross country team posted the highest GPA’s for the fall semester. Also, Academic Achievement Awards were given to men’s track junior Tevin Hester, women’s golf sophomore Taylor Ramsey and men’s soccer senior Phanuel Kavita. for their perseverance and improvement in academics.  The prestigious ACC Scholar Athletes of the Year, awarded by the Atlantic Coast Conference, were presented women’s tennis senior Romy Koelzer and men’s soccer senior Bobby Belair.

Numerous CLEMMYs went to student-athletes for their service in the community. The Top Six student-athletes who completed the most community service (Paul Clowes, Eric Mac Lain, Jessica Doolittle, Kerianne Pacheco and Courtney Fallon) were presented awards by the ACC. Also the Bill D’Andrea Service Award was presented to men’s golf senior Hayden Garrett and the Cecil B. Huey Award was presented to women’s soccer senior Katelyn Reeve.

Awards that combined the student-athletes’ athletic, academic and personal achievements were also presented. The Determined Spirit Award was presented to men’s soccer senior Captain Bobby Belair for his remarkable perseverance, playing with a torn ACL and helping to lead the men’s soccer team to its first ACC championship in 13 years. Also, the Solid Orange Athletes of the Year, presented to the student-athletes who best encompass what it means to be “solid orange”, were awarded to women’s soccer senior Katelyn Reeve and men’s tennis senior Hunter Harrington.

The CLEMMYs award Clemson’s student-athletes for their academic achievements but also focus on their many athletic achievements. Clemson’s two ACC championship teams, men’s soccer and women’s track, were honored with videos recapping their exceptional performances. Football freshman Deshaun Watson and women’s soccer freshman Shannon Horgan were named the Male and Female Rookies of the Year.