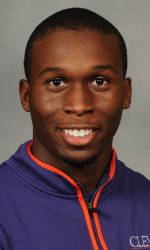 CLEMSON, SC – Clemson sophomore Warren Fraser says he enjoys the challenge of competing against the best in the sport of track & field, because he knows it will elevate his performance level. That mindset was put to the test on May 7 at the Bob Pollock Invitational, when 2008 Olympian and collegiate record-holder Travis Padgett ran in the lane next to him at Clemson’s Rock Norman Track.

“I had heard everyone talk about (former Clemson great) Travis Padgett,” he said. “I was literally shaking in the blocks next to him. But I like to run against people I know are supposed to be the best. I know if I can stay with that kind of sprinter, I’m going to run a fast time.”

That certainly proved to be the case on that Saturday, when he finished second to Padgett in the 100-meter dash with a time of 10.28, by far a personal best. While that time brought a smile to the face of Director of Track & Field Lawrence Johnson, it was Fraser’s most recent performance in Bloomington, IN that left a greater impression on the Tiger mentor.

Last week at the NCAA East Preliminary Round, Fraser advanced out of the qualifying stages in the 100 with a time of 10.35. He followed with an even better time of 10.30 in the quarterfinals, finishing in second place in his heat to earn an automatic berth to next week’s NCAA Outdoor Championships.

“Sometimes, when you sleep in your own bed or you run at home in a good lane, you can put down a good time,” Johnson said. “But for him to go into a championship situation and back his time up gave him even more confidence. I tell you what; he gave NCAA champion Jeff Demps all he could handle for 70 to 80 meters. That was impressive.”

It’s been an up-and-down journey to Clemson for Fraser, a native of the Bahamas. He first caught the eye of Johnson running in the 100-meter final at the 2009 Carifta Games in St. Lucia. Fraser ran a wind-aided 10.26 to win the silver medal, but did so diving across the finish line after his spike caught the track in the final meters of the race.

It was Fraser’s toughness that stood out to Johnson.

“I looked around and asked people, `Who’s that guy?'” he recalled. “Some people said it was a Jamaican guy. I said, `Not him. The guy that fell and finished second? That’s the kind of guy I need.'”

Johnson followed up with Fraser at the meet and met with his father as well. Months later, Fraser was uprooted from Nassau to Clemson in the fall of 2009 as Johnson’s first signee in the men’s sprints.

His rookie season with the Tiger program would prove to be, in a word, rough. Fraser produced solid times on occasion, but the year-round training and commitment to academics admittedly took a toll on him.

“Everything was completely rough,” said Fraser, a two-time All-ACC Academic Team selection. “The training was very different. The workload was the toughest adjustment. The whole indoor thing – banked tracks, flat tracks – was new to me. It was a completely different environment. I felt like I was at a standstill my freshman year, and that I never got better. My times started to go the other way.”

Johnson cited the culture shock of coming to the United States as a factor that slowed Fraser’s development in year one of the program. He challenged Fraser last summer to improve his nutritional awareness and to work harder in the weight room, so that he could maintain his explosiveness and strengthen his toughness.

He finished fourth at the ACC Indoor Championships in the 60-meter dash in February, but shortly thereafter suffered from a groin injury that took time to recover from. The good news for Fraser is that he appears to be hitting his stride at the right time. He is scheduled for the 100 and 4×100 prelims in Des Moines, IA on Wednesday, the first day of the national championship meet.

Fraser’s goal is to advance to the final, and see what happens from there. He hopes to run a time that will qualify him to run for his native country this summer at the IAAF World Championships in Korea.

Johnson believes big things are in store for his sophomore sprinter, and that he will continue to carry over that mindset from the May 7 race against Padgett.

“When we line up a 100-meter sprinter at Clemson, we know people in the stands are watching with a certain expectation,” Johnson said. “If he doesn’t get caught up in the moment, I really think he can run 10.20 or under at the NCAA Championships.”