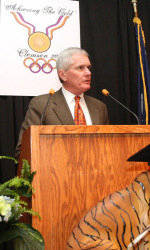 On Monday, April 12, 2010, the Student-Athlete Enrichment Program held its annual Honors Banquet, recognizing and honoring the achievements of student-athletes and student support personnel during the spring and fall semesters of 2009. This year’s theme, “Achieving the Gold,” was the focal point of guest speaker, President James F. Barker, a former track student-athlete at Clemson. Dale Gilbert, weather forecaster for WYFF Channel 4 in Greenville, served as Master of Ceremonies.

The Academic Achievement Award recognized students who showed significant and consistent academic achievement. This year’s awards went to Ronald Watson from football and Eric Cava from men’s soccer. The Academic Team Award was given to teams with the highest grade point average in the Spring and Fall of 2009. These awards were given to women’s swimming and diving and men’s soccer for the 2009 Spring semester and to women’s cross country and men’s cross country for Fall 2009. The Michelin Career Awareness Award was presented to a senior student-athlete who participated in career development programs and developed the necessary skills for career enhancement. This award went to Katrina Obas of women’s swimming and diving.

The NCAA Leadership Conference Recognition honored student-athletes selected by the NCAA for leadership training on regional and national levels. Students recognized were Alex Padgett from men’s track and field, Sthefany Thomas from women’s basketball and Katrina Obas from women’s swimming and diving. The ACC Top Six Award was given to student-athletes who significantly participated in community service during the 2009-2010 school year. These awards were given to Tyler Morey of men’s cross country/track and field, Derek Barre of men’s swimming and diving, Michelle Nance, Victoria Graham and Taylor Hoynacki of rowing and Lindsey Jackson of women’s soccer.

The Bill D’Andrea Service Award honored two seniors who excelled in the classroom, provided key leadership and were involved in community service. The winners this year were Michelle Nance from rowing and Katrina Obas from women’s swimming and diving. The Dr. Cecil O. Huey, Jr. Award was given to two seniors pursuing graduate study who have excelled in academics, athletics and ethical conduct. The award winners were Michelle Nance from rowing and David Newton from men’s soccer. The last award was for the Academic Hall of Fame, which honored recipients of post-graduate scholarship awards. These students were Greg Eckhardt from men’s soccer, Michelle Nance from rowing, Katrina Obas from women’s swimming and diving and Ben Martin (honorary winner) from golf. Each of these student-athletes received the Weaver-James Corrigan Scholarship from the Atlantic Coast Conference.