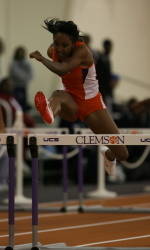 Austin, TX – One school record fell and both of Clemson’s 4×100 relay teams qualified for the finals on the second day of the Clyde Littlefield Texas Relays in Austin.

Sophomore Stormy Kendrick broke her school record in the 100-meter dash prelims, recording a time of 11.23, to earn a spot in tomorrow’s finals. The time is also second on the all-time all-conditions best list.

The women’s 4×100 relay of Misha Morris and La’Mont Jackson, and Spencer Adams also qualified for the finals with a time of 40.71.

Freshmen Brianna Rollins and Bridgette Owens both qualified for tomorrow’s finals in the women’s 100-meter hurdles. With times of 13.10 and 13.17, Rollins and Owens moved into second and third on Clemson’s all-time best list.