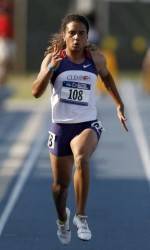 CLEMSON, SC – Clemson rookie Stormy Kendrick – who just this week was named the ACC’s Outdoor Freshman-of-the-Year – finished in third place Thursday in the women’s 100m dash at the USA Junior Track & Field Championships in Des Moines, IA. The meet is being held at Drake Stadium on the campus of Drake University.

Kendrick placed third with a time of 11.40 in the final, after running a time of 11.45 in the preliminary round earlier in the day. A member of Clemson’s All-America 4x100m relay just two weeks ago, Kendrick will compete Friday in the junior 200m dash and try and capture an individual crown.

April Sinkler competed in the senior triple jump on Thursday and fared well in her first USA Track & Field meet. The red-shirt sophomore and four-time All-American finished in 11th place after putting together a top mark of 42’5.25″. She will next compete in the long jump on Saturday.

Blake Kennedy competed in the junior men’s 3000m steeplechase on Thursday and came away with a 12th-place finish out of 26 participants. He posted a time of 9:35.95 in the opening heat, finishing second in that prelim, despite not having competed in a meet since May 8 in the Orange & Purple Classic.

A former Clemson track & field star was in action on Thursday as well. Travis Padgett, a current adidas sprinter and former NCAA Champion in the 60m dash and collegiate record-holder in the 100m as a Tiger, had the top time (10.23) in the prelims of the 100m dash. He moves on to compete in the semifinals on Friday.