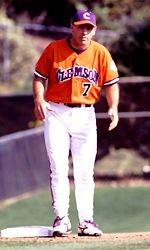 The Tribe (13-4) scored first in the ballgame in the fourth inning. Michael Brown led off with a double down the left field line and came around to score on a Brendan Harris RBI single.

The Tigers (12-2) answered with two runs in the bottom of the fourth. After consecutive singles from Patrick Boyd and Khalil Greene, Michael Johnson reached first base on a fielder’s choice to load the bases. Brian Ellis singled home Boyd and Johnson when he smacked an 0-2 pitch to right field.

The Tigers added three more runs in the bottom half of the fifth inning. After a Casey Stone single, Ryan Hub hit a grounder to second baseman Trey Wakefield, which was mishandled, allowing Stone to reach third and Hub to reach first. A two run triple off the right field wall by Patrick Boyd plated Stone and Hub. Boyd led the Tigers with three hits and four RBIs. Five other Tigers contributed with two hits apiece. The Tigers plated their third run of the inning on an RBI groundout by Greene.

William & Mary added one run in the sixth inning when Mike O’Kelly drew a bases loaded walk, and then tied the game in the top of the seventh inning. After singles by Robert Jones, Stephen Booker, and Chris Clarke loaded the bases, pinch-runner Ricky Stephenson scored when second baseman Bradley LeCroy bobbled a grounder from Wakefield. Matt Additon relieved Kevin Lynn and struck out the first two batters he faced, but an RBI fielder’s choice by Harris and RBI single by Rogers tied the game at 5-5.

The Tigers reclaimed the lead for good in the bottom of the eighth inning when Clemson plated five runs. A two-out infield single by LeCroy kept the inning alive and loaded the bases. Casey Stone then slapped a two-run single up the middle, which gave the Tigers a 7-5 lead. After a Justin Singleton walk, Boyd singled home Singleton and Stone. A Greene single scored Boyd giving the Tigers their 10th and final run.