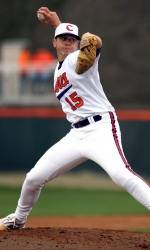 Stoneburner (4-0) allowed just two hits (both singles), no runs, and one walk with seven strikeouts to earn the win. He threw 118 pitches to record Clemson’s first individual shutout since June 4, 2005, when Doug Kingsmore Stadium.

Stoneburner, a Richmond, VA native, allowed a no-out single to Matt Payne in the second inning and a two-out, infield single to Chris Schaeffer in the eighth inning. The other two baserunners he allowed came on a walk and throwing error. He also allowed just one N.C. State player to reach second base, while no Wolfpack player advanced to third base in the entire game, which lasted only one hour and 58 minutes.

The Tigers got all the scoring they would need in the first inning. Mike Freeman led off with a single up the middle and went to third on a wild pitch that Schaeffer could not find behind the plate. Wilson Boyd’s groundout to second plated Freeman. Doug Hogan followed with a double down the left-field line, stole third, and scored when Schaeffer’s throw to third was errant.

Hogan had a game-high two hits, including a double and triple, for the Tigers, who totaled seven hits in the contest.

Clemson will play host to Elon in a two-game, midweek series beginning Tuesday at 7:15 PM.