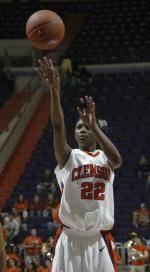 Greensboro, NC – Clemson’s Lakeia Stokes and Wake Forest’s Cotelia Bond-Young share this week’s ACC Women’s Basketball Player of the Week accolades, while Florida State’s Shante Williams and Maryland’s Shay Doron each earn a piece of this week’s Rookie of the Week honors as announced by the league office Monday afternoon.

Stokes scored 18 points on 7-of-12 shooting from the field in Clemson’s loss to Florida State. The senior guard/forward finished the night with eight rebounds, seven assists and three steals, while connecting on 3-of-5 attempts from the charity stripe and 1-of-3 from three point range. In the Tigers’ win over NC State, the Convington, Ga., native turned in 23 points and 12 rebounds. She was a perfect 8-of-8 from the free throw line, while dishing out four assists and collecting one steal.

Bond-Young helped Wake Forest split its two ACC games this past week. The sophomore guard poured in a career-high 27 points, including 21 in the second-half, to help the Demon Deacons snap a 14-game losing streak against NC State. The 70-66 victory was the first win in Raleigh for the Deacs over the Wolfpack since the 1995-96 season and only the second all-time in 28 games. The Landover, Md., product, who was making her first start of the season for an injured Bianca Brown, went 8-for-12 from the floor, including a season-high 4-for-5 from behind the 3-point arc. She also knocked down 7-of-9 from the free throw line. Bond-Young also corralled five rebounds against NC State. She then added 14 points and dished out four assists in the Deacs’ loss to Maryland.

Williams led Florida State last week, averaging 16.0 points, 8.5 rebounds, 4.5 assists and 4.0 steals in the Seminoles’ two ACC road games this week. The point guard scored a career-high 18 points in 25 minutes of play and grabbed seven rebounds at No. 1 Duke. At Clemson, the 5’7″ Jacksonville, Fla., product recorded her first career double-double with 14 points and 10 rebounds, while also adding a team-high six assists and a team-high five steals while committing just one turnover in a team-high 31 minutes of play. Williams shot 40 percent from the field in the two games and was 11-for-12 from the free throw line for 92 percent.

Doron scored 23 of her career-high 32 points in the second half, leading Maryland to a 75-58 win over Wake Forest as the Terps remain undefeated in ACC play. The Great Neck, N.Y. guard’s 32-points tied the freshman class school record and ties for the most by an ACC player this season. It is also the seventh-highest point total by a Terrapin in school history. She shot better than 50 percent from the field (.529) and missed just one free throw in 12 tries. Doron also led the team with five assists.