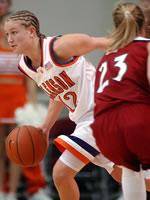 With the win, the Lady Tigers improve to 8-1 on the season, while Youngstown State falls to 1-7.

Stokes scored 27 points, 18 in the second half, and went 14-16 from the free throw line to lead Clemson in both categories. Julie Talley 24 points was a career high. Poland, OH native Maggie Slosser led the team in rebounding with 10.

Youngstown State was led in scoring by Jessica Olmstead’s 23 points. Jessica Forsythe pulled down eight rebounds to lead the Penguins.

In the second half, Clemson took its first lead at the 17:09 mark from a Julie Talley three pointer. Then, after seven lead changes, the Talley hit another three at the 7:01 mark to give Clemson a lead that it would not relinquish.

The Lady Tigers trailed 33-28 at the intermission, after shooting 35.5% from the field. Clemson was led in the first half by Stokes, who recorded nine points. Slosser led the team in rebounding in the first half with five.

Youngstown state led most of the first half, behind a 53.3% shooting performance from behind the three-point line (8-15). Jessica Olmstead led the Penguins with 14 points and six rebounds before the break.

Clemson’s next action will be on Sunday, Dec. 21, as they travel to Pittsburgh. Tip off is slated for 1:00 PM.