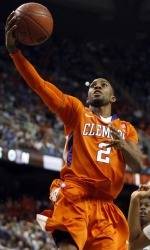 Stitt to Play in Portsmouth Invitational This Week

CLEMSON, SC – Clemson guard Demontez Stitt has been invited to play in this week’s 59th annual Portmsouth Invitational in Portsmouth, VA. Stitt will be one of 64 college seniors playing the showcase tournament. He was named to the roster for Sales Systems, Ltd late last week. Games will be held from Wednesday, April 6 through Saturday, April 9 at Churchland High School in Portsmouth.

Among the teammates selected to play alongside Stitt are Curtis Kelly (Kansas State), Mike Tisdale (Illinois) and Brad Wanamaker (Pittsburgh). Stitt and his teammates will start the tournament Wednesday against K&D Rounds Landscaping, a team that features the likes of Frank Hassell (Old Dominion), Rick Jackson (Syracuse) and Chris Warren (Mississippi).

Stitt concluded his career with 1,365 points, tied for 14th in Clemson history. He is sixth in school history with 419 assists and ninth with 164 steals. The Matthews, NC native is also among the top 10 in the Clemson record books in free throws made (344) and minutes played (3,513).

Stitt led the Tigers to four straight NCAA Tournament appearances and four straight winning seasons in ACC play, both firsts in school history. He led this year’s squad in scoring at 14.5 points per game, and in assists at 3.3 per game. He was a third-team All-ACC selection at the conclusion of the regular season. He was named first-team All-ACC Tournament after posting back-to-back 20-point games against Boston College and North Carolina. Most recently, he was named to the Lefty Driesell All-America Defensive Team by CollegeInsider.com.