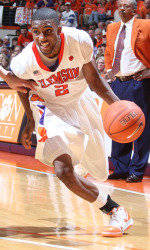 Stitt Out for Tuesday’s Game at Boston College

CLEMSON, SC – Clemson Head Coach Oliver Purnell announced Monday that Clemson’s starting point guard, Demontez Stitt, would not play Tuesday when the Tigers take on Boston College in Chestnut Hill, MA. The game is scheduled for 7:00 PM and will be televised by ESPN2. Stitt suffered a left mid-foot sprain in the Jan. 16 win at NC State, then played through the injury at Georgia Tech on Jan. 19 and at home versus Duke on Jan. 23.

Sophomore Andre Young is expected to make his first career start in Stitt’s absence. Young ranks fourth on this year’s team in scoring at 8.0 points per game. He also ranks fourth in the ACC with 1.8 steals per game this season.