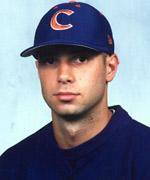 Vern Sterry allowed just two runs, one earned, on six hits in 8.2 innings pitched to improve to 7-0 on the season. The California junior college transfer threw 147 pitches while striking out 10 and walking four. Tiger starter Jason Berken (3-1) suffered his first loss as a Tiger.

Marc Maynor got the scoring started for N.C. State in the first inning. He led off with an infield single, advanced to second on a throwing error by the pitcher, and to third base on a passed ball, the first by the Tigers this season. Dutton then hit a soft liner to left fielder Roberto Valiente, who dropped the fly ball. After Joe Gaetti flied out, Colt Morton hit a pop-fly double down the right-field line to bring home Dutton. David Hicks followed with a single through the left side on a perfectly executed hit-and-run play to score Morton and put the Wolfpack ahead 3-0.

The Wolfpack added another run in the fourth inning. After the first two batters were retired, N.C. State singled three times, highlighted by Dutton’s line-drive single to right field to score Dustin Murphy.

Chad Orvella’s single through the right side gave the Wolfpack a 5-0 lead in the fifth inning and chased Berken from the game. The Wolfpack threatened further with the bases loaded and one out; but reliever Aaron Trolia struck out two straight batters looking to end the inning.

Ryan Hub finally put the Tigers on the board in the sixth inning on a long, solo home run down the left-field line. His third homer of the season broke a personal 0-for-9 slump.

N.C. State added five insurance runs in the seventh inning. Trolia walked two batters and gave up a single to Matt Camp to load the bases. Murphy then brought home Justin Riley on a safety squeeze bunt. After Maynor walked to reload the bases, Dutton hit a wind-aided, opposite-field grand slam to give the Wolfpack a 10-1 lead. Dutton, who hit a walk-off homer a night ago, went 2-for-4???? with six RBIs in the game.

Orvella’s double down the right-field line and Camp’s RBI groundout gave the Wolfpack a 12-1 lead in the eighth inning. The 12 runs allowed was a season-high for Clemson.

Clemson got on the board in the ninth inning. After Herman Demmink’s two-out single to load the bases, Hub walked to bring home a run. Demmink’s hit was the first hit by a Tiger with two outs in 20 at bats in the series.