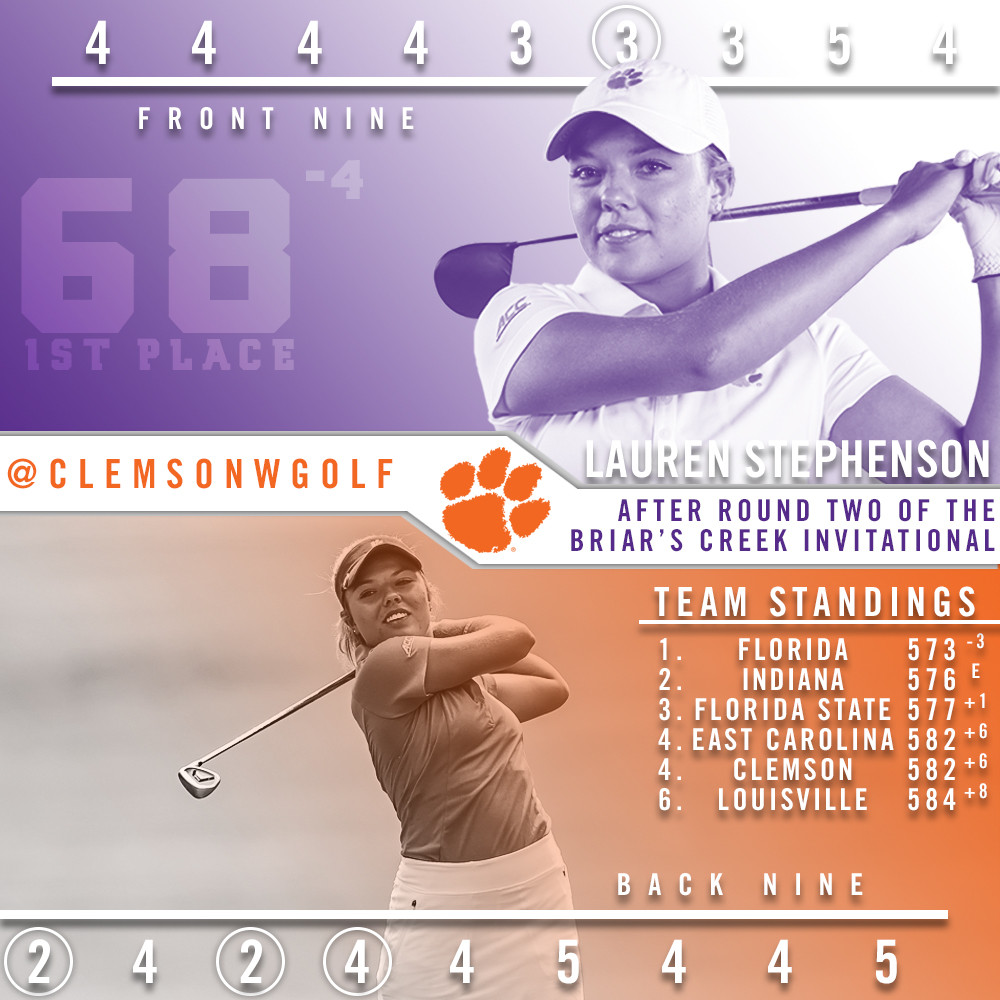 Clemson, S.C.—Freshman Lauren Stephenson became the first Clemson women’s golfer to post two rounds in the 60s in the same day and has the individual lead entering the final round of the Briar’s Creek Invitational at the Golf Club at Briar’s Creek at Johns Island, S.C.

Clemson stands in a tie for fourth place in the 18-team field after 36 holes.  This the only tournament Clemson plays each year in which the teams play 36 holes on the first day.  Eighth ranked Florida has the team lead at 573, while Indiana is second at 576.  Florida State is third at 577 and Clemson is tied for fourth with East Carolina at 582.

Clemson had a 288 team score for the second round, the third best total score and second best score versus par this year.

Stephenson, a freshman from Lexington, S.C., has a two-shot lead over Morgane Metraux of Florida State.  Stephenson had rounds of 69 and 68 on Monday to shoot 137 for the day, seven-under-par.  The rounds were her third and fourth rounds in the 60s this year and her second round 68 tied for the third best round in the three years of the Clemson program.

Stephenson had five birdies and two bogeys for her opening round, then had four birdies and no bogeys in the afternoon round. For the day she played the par three holes in one-under, the par fours in two-under and the par fives in four-under.  She will be attempting to capture her second victory of the year on Tuesday on the par 72 course that is 6,185 yards in length.  She was co-medalist at he Yale Women’s Intercollegiate in the fall.

Stephenson received support from classmate Alice Hewson, who had rounds of 71-74 on Monday and her 145 score stands in a tie for 18th place.  She had three birdies and two bogeys on the front nine in the morning round, then had nine straight pars on the back.

Marisa Messana had an 80 in the morning round, but cut eight shots off that score in the afternoon when she had an even par 72.  She had four birdies and four pars on the second 18.

Sydney Legacy, a sophomore playing in her second tournament as a Tiger, had rounds of 78-74 for a 152 total.  Also a native of Lexington, Legacy had a strong second 18 with three birdies and five bogeys.

Sloan Shanahan played well in the morning round with a 76, including even-par over her last 10 holes.  But she withdrew in the afternoon round.

The teams will begin play at 8:45 a.m. on Tuesday.  Living scoring is available at golfstat.com