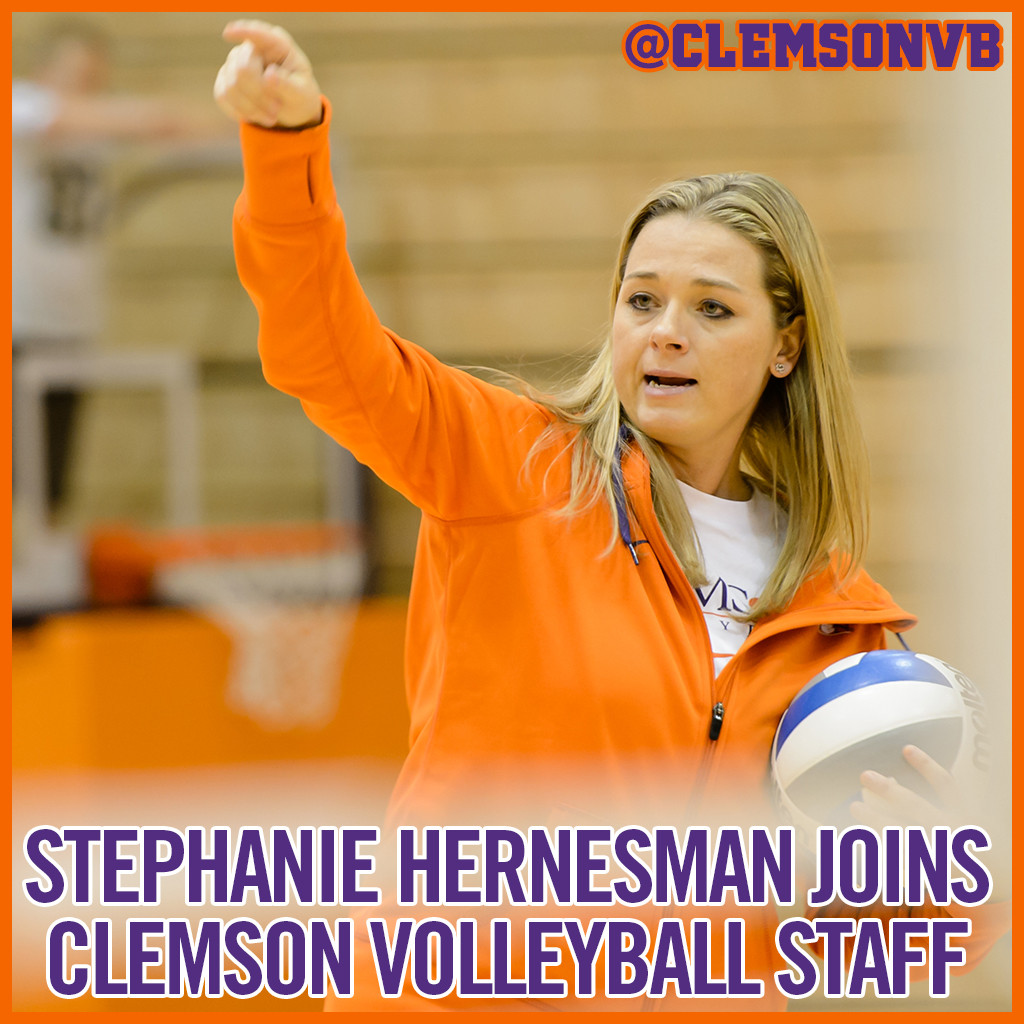 CLEMSON, S.C. – Stephanie Hernesman has been named an assistant coach with the Clemson volleyball program, Director of Athletics Dan Radakovich and Associate Athletic Director/Senior Woman Administrator Natalie Honnen announced. Hernesman has served as the co-head coach, along with her husband Hugh, at Northwestern State University in Natchitoches, La. for the past five years. Hugh Hernesman was named Clemson’s head coach in March.

“We did not have to look far for a great assistant coach,” said Honnen. “Stephanie was paramount in building a successful program at Northwestern State and her prior stops. The more we learned, the more vital it is was to add her to the staff. We are excited to watch Hugh build this program with Stephanie at his side.”

“I am very excited to join Clemson University and the volleyball program,” said Hernesman. “The Clemson family is something truly unique, and it fits very well into how we run our program and the family culture we have within it. Clemson University is a very special place and I am honored to have the opportunity to work with Hugh and the Clemson family to make the volleyball program one of the top programs in a very competitive ACC. I would like to thank Dan Radakovich and Natalie Honnen for the opportunity and for believing in our vision for this program. We truly believe that Clemson Volleyball will be something very special.”

Hernesman guided the Lady Demons to the program’s first Southland Conference title in 2014, as well as a berth in the NCAA Tournament. Under her direction, Northwestern State posted back-to-back 20-win seasons in 2012 and 2013, and set school records for overall wins (21), conference wins (15) and highest final RPI (98) in 2013. In addition to success on the court, Hernesman’s Northwestern State team also experienced success in the classroom, earning the AVCA Team Academic Award three times, in 2011, 2012 and 2013.

Prior to arriving at NSU, Hernesman served as a volunteer assistant coach at Ball State from 2007-09, during which time the Cardinals made two appearances in the Mid-American Conference Tournament. From 2004-07, Hernesman was an assistant coach at Hardin-Simmons University in Abilene, Texas. She helped lead the Cowgirls to the program’s first American Southwest Conference Tournament championship in 2006, as well as the school’s first appearance in the Division III NCAA Tournament.

Hernesman played for Wisconsin-Whitewater from 1995-98, where she was three-time AVCA All-American. She helped lead the Warhawks to four NCAA Tournament appearances, including a Final Four berth in 1995, and three Wisconsin Intercollegiate Athletic Conference championships in her four seasons. She was inducted into the Wisconsin-Whitewater Athletic Hall of Fame in 2013.

Hernesman graduated from Wisconsin-Whitewater in 1999 with a degree in Finance. She began her collegiate coaching career at her alma mater from 1999-2003, during which time she also coached the Milwaukee Sting Volleyball Club and was a camp instructor for the USA Volleyball High Performance Program.

The Hernesman’s have two children, son Austin and daughter Emma.