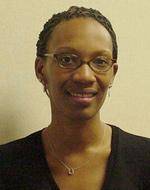 Ellison served as the Director of Legislative Services and Assistant to the Commissioner at the Southern Conference since February 2003. While at the Southern Conference office, Ellison was responsible for tracking NCAA legislative proposals, and served as the staff liaison to various conference associations and sports committees, including the conference Student Athlete Advisory Council (SAAC), the Executive Committee, the Finance and Audit Committee, and to the volleyball and men’s and women’s track and field committees.

Prior to her time with the Southern Conference, Ellison served as the Director of Compliance and the Assistant Compliance Officer at George Mason University. Ellison was named Assistant Compliance Officer in June 2001, and served in that capacity until she was promoted to Director of Compliance in August of 2002. While serving as the Compliance Director at George Mason, Ellison’s responsibilities ranged from overseeing the NCAA Special Assistance Fund to providing interpretations of NCAA legislation. She conducted monthly rules education meetings with the coaching staff and processed NCAA waivers and appeals, and assisted in investigating rules violations. Ellison also served as a volunteer mentor in the Fairfax County Public Schools for the Dream Catchers Program.

Ellison began her career in compliance services at Clemson University, where she was a graduate assistant from August 1999-May 2001. Her responsibilities included collecting and reporting student-athlete data, as well as administering NCAA and ACC forms to enrolled student-athletes. Ellison also provided interpretations of NCAA legislation and served as a liaison to the NCAA Clearinghouse. She also served on the SACS/COC Assessment Committee. Ellison developed forms used in monitoring activities and assisted in coordinating NCAA’s athletics certification orientation visit.

A May 1998 graduate of Clemson with a degree in Parks, Recreation and Tourism Management, Ellison also completed a master’s degree in Human Resource Development from Clemson in May 2001. As an undergraduate, she worked as a student assistant with the football office. Ellison is a member of the Alpha Kappa Alpha Sorority.