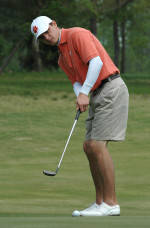 Stanley Tied for 14th after Two Rounds of NCAA Golf

Clemson, SC – Clemson freshman Kyle Stanley fired a second round 69 on Thursday and stands in a tie for 14th place after two rounds of the NCAA Men’s Golf Tournament at par 70 The Golden Horseshoe in Williamsburg, VA. Stanley has a 36 hole total of 139, seven shots off the lead held by Bronson LaCassie of Minnesota, who is at eight-under par 132.

Stanley had five birdies and four bogeys for his day’s work. His score never varied between one over and one under par. His round was highlighted by a near hole-in-one on the par three 16th hole that is 169 yards in length. Stanley hit his seven-iron to within 10 inches of the cup, then tapped in for a birdie.

That birdie on 16 put Stanley at one under par, but he bogeyed the par four 18th, then moved to the front side where he bogeyed the par three third. But, Stanley birdied two of the last four holes, including the par five sixth for the second straight day.

Stanley will tee off at 8:35 AM on Friday in the third round. At the conclusion of the third round, Stanley must rank among the top six individuals not affiliated with a team that makes the 15-team cut.

“Kyle played a solid round of golf today,” said Clemson Head Coach Larry Penley. “He hit a lot of fairways and greens. That was his strategy. He hit driver off the tee just three times and he might go down to just once on Friday. He played with confidence and is getting comfortable with the course.”

Stanley has now played the Golden Horseshoe five rounds and has scored par or better four times. He had an opening round even par 70 on Wednesday.

Stanley is hoping for a high finish that will insure his selection to the All-America team, which will be named after the conclusion of this tournament. No freshman in Clemson history has made first-team All-American.