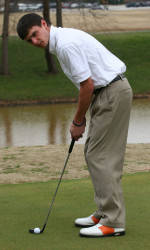 Stanley Qualifies for US Open with Six Under Par Day in Columbus, Ohio

Clemson, SC – Clemson sophomore All-American Kyle Stanley shot a six-under-par 137 at two different courses in Columbus, OH on Monday and qualified for the 2008 United States Open. Stanley finished in a tie for eighth in the field of 140 golfers that included many current PGA Tour players, some of whom have been Major Champions.

Stanley will be one of three golfers with ties to Clemson at the US Open June 12-15 at Torrey Pines (South Course) in San Diego, CA. Jonathan Byrd was exempt from qualifying by virtue of his top 30 finish on the PGA Tour money list last year. D.J. Trahan qualified by winning a playoff in Roswell, GA over current Clemson golfer Ben Martin on Monday. Martin will be the first alternate from that site.

This will be the first time three golfers with ties to Clemson have played in the same US Open. Clemson has had two current or former players participate in the event on six occasions, including as recently as 2006.

Stanley will be just the second active Clemson golfer in history to play in the United States Open. The only other Clemson golfer to make the field while still a Clemson student was Chris Patton in 1990. Patton qualified automatically by winning the 1989 United States Amateur. Stanley opened his day with an even par 71 on the Scarlet Course at Ohio State in the morning, then shot a six-under par 66 in the afternoon at the Brookside Course, also in Columbus, OH. Stanley had three birdies and three bogeys at the Scarlet Course, then had seven birdies and a bogey at the Brookside Course.

“My goal was to just shoot par at The Scarlet Course because that is a very difficult course,” said Stanley. “Then, in the afternoon at Brookside I just tried to play as well as I could. I didn’t have a specific score in mind, just take it one hole at a time. I made a 15 footer for birdie on the first hole, then made a 30 footer on the second hole and that got me going.” Stanley birdied two of his last three holes with birdie putts inside five feet.

Stanley’s day was remarkable in that he was coming off an 82 in the final round of the NCAA Championships at Purdue University’s Kampen Course on Saturday, tied for the high round of his college career. He, along with teammates Phillip Mollica and Sam Saunders, drove to Columbus, OH on Sunday, then played the 36-hole qualifier on Monday.

“The course at Purdue was so difficult, that it made these two courses seem easy,” said Stanley. “The conditions were much easier in that it was not windy at all. Saturday was one of the more difficult days I have had on a golf course. But, today was probably my most rewarding. To play in the United States Open at age 20 is very special.”

Stanley almost had a Clemson teammate join him at the US Open. Classmate D.J. Trahan, the leader of Clemson’s 2003 National Championship team.

Trahan made a 15-foot putt for birdie on the last hole to tie Martin, sending the two Clemson golfers into a playoff for one US Open spot. The two players both made pars on the first hole. On the second hole, Martin had a six-foot birdie putt to win the playoff, but the putt missed.

On the third playoff hole both players hit tee shots in the middle of the fairway, but Martin’s approach was 30 feet from the hole. Trahan hit his approach to within four feet. Martin missed his birdie putt and Trahan made his to qualify for the United States Open for the second time in his career.