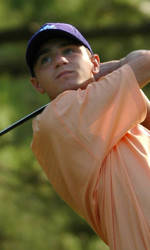 The native of Gig Harbor, WA was the only ACC player on the first-team and one of just two freshmen nationally named to the team. Jamie Lovemark of Southern California, who beat Stanley by two shots last weekend at the NCAA tournament in Williamsburg, VA, was the only other freshman named to the first team.

Stanley is the first Clemson player named to the first team regardless of class since D.J. Trahan was a first-team choice in 2003. Stanley was also named a first-team freshman All-American by the Coaches Association.

Stanley finished the 2006-07 season with a 70.87 stroke average, best in Clemson history by a freshman and second best overall. Only Trahan’s 70.33 average in 2001-02 when he was named National Player of the Year, is better. Stanley also led the Clemson team in top 10 finishes with six, rounds under par with 18 and rounds in the 60s with 11.