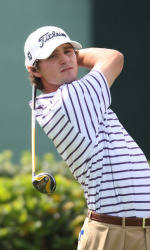 Clemson, SC – Clemson junior Kyle Stanley has been named one of three finalists for the 2009 Ben Hogan Award. The honor is given each year to the top collegiate golfer and takes into account performance in college and amateur tournaments from May 2008 to May 2009. The Ben Hogan Award is presented by Chesapeake Energy in association with the Colonial Country Club and will be presented in Fort Worth Texas on May 22.

D.J. Trahan won the award in 2002 and is the only former Clemson golfer to be honored.

Stanley is Clemson’s top golfer this year with a 71.58 stroke average for eight tournaments and has six top 10 finishes. He has led the Tigers to a number-four national ranking and a team victory at the United States Collegiate at Alpharetta, GA. He has a 71.68 career stroke average, second in school history. He trails only Trahan, who had a 71.49 average between 1999-03.

Stanley is ranked third in the United States and eighth in the World Amateur Rankings according to Golfweek. He is seventh in the Golfweek/Sagarin collegiate rankings. He gained victory at the Southern Amateur last July in Orlando, FL, a national amateur event, and won the Carpet Classic in Dalton, GA in September.

The other finalists for the Ben Hogan Award are Jorge Campillo of Indiana and Rickie Fowler of Oklahoma State.