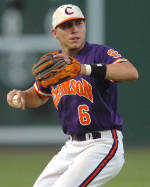 Clemson, SC – Fifth-year shortstop Stan Widmann has left the team due to personal reasons, announced Wednesday by Head Coach Jack Leggett. Widmann, who graduated from Clemson with a degree in sport management in December, has withdrawn from school and will pursue job opportunities.

“Stan has been a valuable and loyal member of our baseball program for the past five years,” said Leggett. “It’s extremely difficult to see this come about, but I certainly understand his decision. He has overcome some tough obstacles and has not been healthy this season, which I know has been frustrating for him. I respect what he has accomplished as a member of both an ACC Championship and College World Series team. We certainly wish the best for him and his future.”

The Hurst, TX native was a career .284 hitter with 30 doubles, five triples, eight homers, 90 RBIs, and 39 steals in 42 attempts in 194 games (191 starts) as a Tiger from 2005-09. He was the starting shortstop on Clemson’s 2006 ACC Championship and College World Series team when he hit .307 in 67 games. Widmann also overcame a serious neck injury that forced him to miss most of 2007. As a graduate student in 2009, he only appeared in one game (as a pinch-runner) due to lingering effects from a shoulder injury.