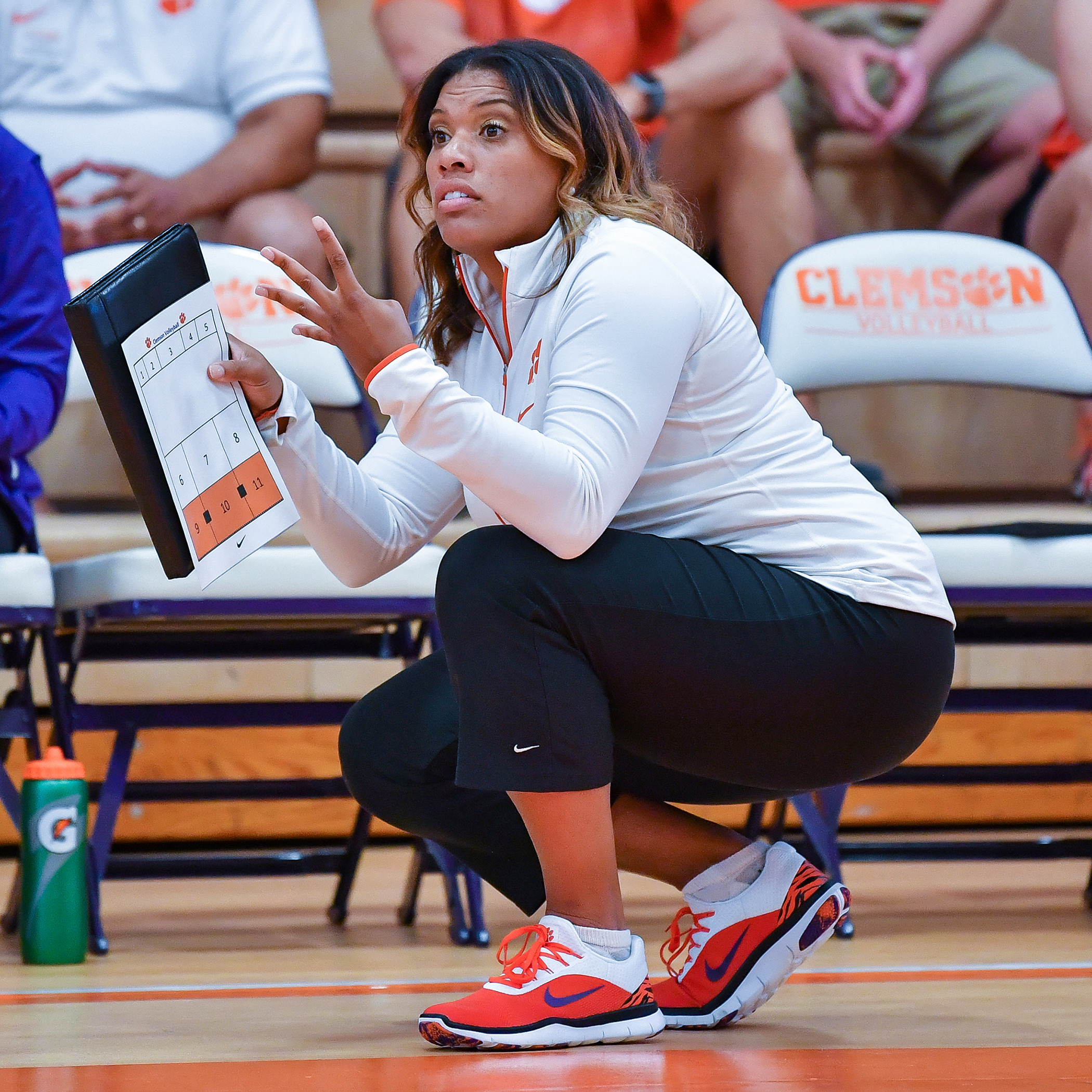 As someone who has worn several different hats in several different locations, Franklin has had the pleasure of working with a variety of outstanding athletic programs during her career. But prior to visiting Tigertown, she had never felt anything quite like the unique combination of the familial feel and commitment to winning that forms the bedrock of Clemson.

“With the facilities and the success that its programs have had, it has an elite-level atmosphere,” said Franklin. “Yet it still has that family dynamic, which is something that is really unique about Clemson, because not every university has that.”

As it turns out, her good vibes rang true, as her visit to Clemson went swimmingly, and she was hired in March to take the helm of the program. A former standout right-side attacker for Kansas State, Franklin boasts a resumé laden with successes from both her playing and coaching days.

Franklin was a three-sport star at Lincoln (Neb.) High School, competing in basketball, track & field and volleyball. Her prep volleyball career was highly decorated, as she earned all-state honors as a senior and led her squad to two district titles.

She competed at the college level from 2001 to 2004, playing at Northern Michigan as a freshman before suiting up at Kansas State for the remainder of her career. While at Kansas State, she was well-rounded on the court.

“I’m fully convinced that I was sent to Kansas State to become a great coach, not a great player,” admitted Franklin. “I went through that roller-coaster ride of starting sometimes and not seeing the court other times. It helped me evolve as a person and competitor.

“I was able to see the game from different perspectives, and now I’m able to relate to my players because I’ve been in their shoes. I know what it’s like to be on their side of things.”

Franklin began her ultimate dream of coaching college volleyball by serving as an assistant under renowned Northern Illinois head coach Ray Gooden from 2006-08. She next teamed up with Bond Shymansky at Marquette, where she served as defensive coordinator.

Franklin helped lead the Golden Eagles to their first NCAA Tournament appearance and win in 2011, which was a defining achievement in the buildup to her head-coaching appointment at Wisconsin-Green Bay in 2013.

Thereafter, Franklin opted to rejoin Shymansky by becoming an assistant coach with his new program, Iowa. Serving as defensive coordinator and recruiting coordinator for the Hawkeyes from 2014-16, she utilized the learning opportunities presented by coaching alongside the great to prepare her for the premier opportunity of becoming the head coach of the Tigers.

Despite being a proverbial greenhorn of the head coaching profession, Franklin is certainly wise beyond her years and ready to take the program to new heights. Although she comes from an athletic family, as she is the daughter of former Nebraska and Miami Dolphin running back Andra Franklin, she does not limit her coaching approach strictly to sports.

Hailing “championship behavior” as “her philosophy for coaching and life,” she has never strayed from her steadfast commitment to displaying championship behavior throughout her volleyball career. Centered upon a never-ending effort to be the best person, teammate, student and volleyball player one can be, Franklin’s formula for “championship behavior” is the perfect recipe for success in the world of college athletics, and it will rightfully serve as the groundwork for the program as long as Franklin is in charge.

“I believe that in order to win championships in volleyball or be a winner in life, you have to behave like a champion. It doesn’t all of a sudden turn on at one moment. You have to be consistent.”