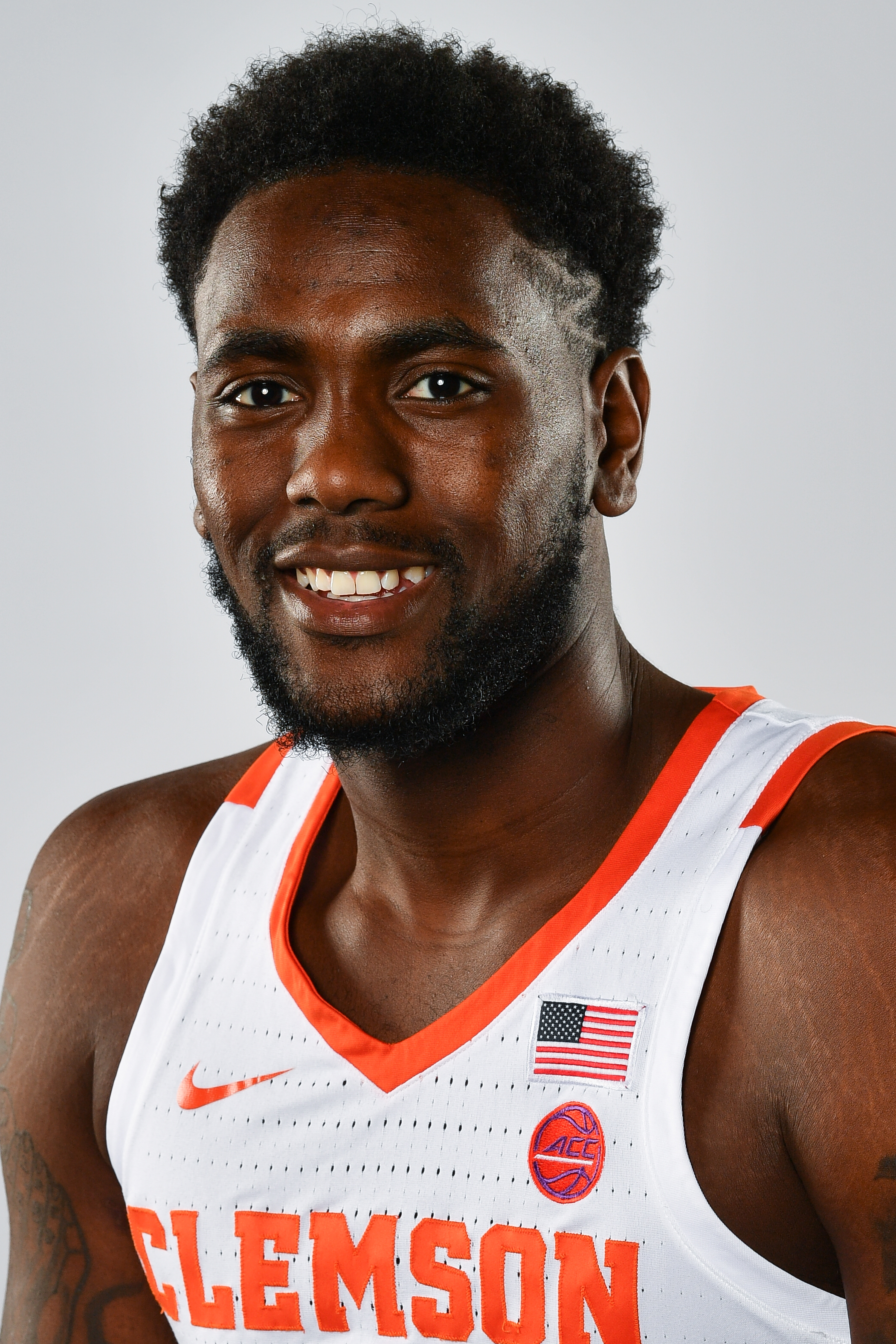 Overview
Recently completed second season for Clemson after transfering from Texas A&M University … began playing for the Tigers as a true sophomore in 2016-17 … turned into one of the most formidable big men in the ACC last season during 2017-18 … as a mid-year transfer, sat out nine games in the 2016 fall semester, per NCAA rules … provided a lift for the Tiger frontcourt following the departure of Landry Nnoko to graduation … versatile player is capable of scoring in the paint with both hands … gives the Tiger program significant size at 6-9 and 230 pounds … has appeared in 67 career games, with 41 starts … has 582 points and 404 rebounds to his credit … signed a financial aid agreement with Clemson after official visit in December 2015 … first player from the state of Texas to sign with Clemson … majoring in parks, recreation & tourism management.

2018-19
Appeared in 32 games and has made 30 starts this season … played in a career-high 36 minutes against Mississippi State (Dec. 8) … has tallied nine double-doubles this season and posted two in back-to-back contests against Akron (Nov. 19) and Georgia (Nov. 20) in the Cayman Islands Classic … collected his third double-double against Saint Peter’s (Dec. 4) … posted his best stat line of the season against Charleston Southern in 26 minutes … scored 25 points and grabbed 14 rebounds while blocking four shots … finished 9-for-12 from the floor against the Buccaneers … posted double-digit rebounds on four occasions with a season-high of 14 against Charleston Southern (Dec. 18) … scored a season-high 25 points in a win over Charleston Southern … posted sixth double-double of the season with 23 points and 10 rebounds against Wake Forest (Feb. 3) … swatted a career-high seven shots against the Demon Deacons … in games that Thomas has posted a double-double the Tigers are 15-5 overall … Thomas is one of just nine players in Clemson history to amass at least 700 points, 450 rebounds and 125 blocks in a Tiger uniform and one of just seven to accumulate 900 points, 600 rebounds and 150 blocks … cracked the top ten list in Clemson history for blocks in a career … sits at No. 10 with 176 blocks in his career … his 1.93 blocks per game are fourth all-time in Clemson history … tied his career-high with seven blocked shots against Virginia Tech (Feb. 9) … scored 15 points and grabbed seven rebounds at Louisville (Feb. 16) … posted his seventh double-double of the season and the 18th of his career against Boston College (Feb. 23) … racked up 14 points and 10 rebounds against the Eagles … posted his eighth double-double of the season and 19th of his career against North Carolina (March 2) with 14 points and 11 rebounds … finished with 14 points and eight rebounds with four more blocks at Notre Dame (March 6) … entered the Clemson top-25 in career rebounds and now has 637 – 19th all-time … notched his ninth double-double of the season with 13 points and 11 rebounds against Syracuse (March 9).

2017-18
Appeared in 35 games and made 32 starts during what was a career year for the junior from Dallas, Texas … averaged a career-best 10.7 points and 8.1 rebounds per game … the rebounds were good for ninth in the ACC … posted nine double-doubles – the most since Trevor Booker also posted nine in 2009-10 … collected two massive double-doubles during the season, the first of which was a 17-point, 15-rebound outing against Ohio in the Charleston Classic … became the first Tiger to post at least 15 points and 15 rebounds since Trevor Booker did it nine years prior on the exact same day and in the exact same gym on Nov. 16, 2008 vs. Temple in the Charleston Classic … also posted 26 points and 16 rebounds against Texas Southern becoming the first Tiger since Dale Davis nearly 37 years earlier on March 15, 1990 when Davis posted 26 and 17 against LaSalle in the NCAA Tournament … posted double-digit rebounds on 12 occasions … led the team in rebounding (8.1 per contest) … led the Tigers in blocks with 79 total blocks and 2.3 per contest … the 79 blocks were good for third in the ACC, while his 2.3 blocks per game were good for fourth … became the first Tiger since Sharone Wright in 1993-94 to post at least 350 points, 275 rebounds and 75 blocks in the same season … shot 61.9 percent (83-for-134) at the foul line after previously shooting 43.9 percent (29-for-66).

2016-17
Appeared in 24 games, with nine starts … averaged 16.9 minutes per game … fifth on the team with a scoring average of 7.5 points per game … added 4.2 rebounds per contest … shot 57.8 percent from the floor, the top figure by a first-year player at Clemson since Trevor Booker in 2006-07 … blocked 28 shots, ranking second on the team behind Jaron Blossomgame … led Clemson in rebounding in four contests … scored double figures in seven games.

BEST GAMES, 2016-17
Top game was at Duke, where he produced 15 points and nine rebounds in 30 minutes of play … made 5-7 field goals and free throws in that contest with the Blue Devils … first career double-double came against Georgia Tech, he had 12 points and 10 rebounds in the Feb. 1 meeting … also had a double-double at Miami, with 12 points and 11 rebounds … posted 12 points and seven rebounds in big road win over top-25 South Carolina team, it was his second career game as a Tiger … posted 12 points on 5-6 field goals, with five blocked shots, in win over UNC Wilmington … scored 12 points at Virginia Tech, with nine rebounds in 21 minutes … notched 10 points in ACC Tournament win over NC State and eight in the following game against Duke … posted eight points and two steals in win at Wake Forest … notched nine points and four blocks at Notre Dame … tallied nine points, with four rebounds, two blocks and two steals, against a ranked Virginia team at home … posted eight points on 4-5 shooting versus Wake Forest at home.

2015-16 (at Texas A&M)
Appeared in eight games for a total of 79 minutes … averaged 3.8 points and 2.5 rebounds per game off the bench … made 12-19 field goals for a strong 63.2 percent clip … posted season-high 11 points against USC Upstate in his first collegiate game … notched six points and six rebounds against Southeastern Louisiana … posted seven points and two blocks in season-high 19 minutes against UNC Asheville.