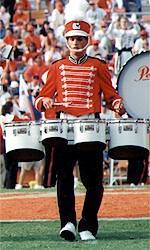 Clemson, SC – Next week marks the return of a Clemson tradition known as Spirit Blitz. In 1984, Central Spirit first created Spirit Blitz by devoting an entire week for Tiger fans to display their Clemson spirit. Sports promotions and events went on every day of that week at the university and culminated in a place card design held up by the fans on the home side of Death Valley that read “Up Roar ’84”. The following year, culminated in the release of 275,000 balloons. Spirit Blitz Week was planned again in ’88, ’90, and again last year during the week of the Georgia Tech game, which ended with the construction of several balloon arches to cover the Tigers as they ran down The Hill.

This year, the event is trying to find itself a permanent place in the annual traditions of Clemson University with Spirit Blitz 2001. Central Spirit has teamed up with the Union Entertainment Committee (UPAC), IPTAY Collegiate Club, Tiger’s Who Care, Student Government, and the Athletic Department to make this event bigger and better.

Starting on Monday (9/17) we will begin “Paint the Town Orange” which will involve Clemson student organizations decorating all areas of campus in Clemson colors. Statewide, fans are also asked to decorate their houses, cars and driveways. Hang up flags, paint a Paw in the driveway or go overboard (preferably). Take pictures and send them to the Orange and White. The best decorations will be published.

All week long, Tiger’s Who Care is having a food drive to coincide with the event asking anyone willing, not just Clemson fans, to donate any canned goods that they can spare. Donations may be brought to collectors in front of Bi-Lo in Clemson, the Hendrix Center Atrium, or the University Student Union.

Edgar’s Pub at Clemson is also hosting “Spirit of Clemson”, and open mic night with a Clemson twist starting at 7:00pm Wednesday (9/19). Come out to the volleyball games going on during the week in Jervey Gymnasium to cheer on the Lady Tigers. On Tuesday (9/18) at 7:00 the Tigers play host to Wake Forest and again to Florida State Friday (9/21) at 7:00.

Thursday night (9/20) at 9:00, in the Edgar’s Pub Courtyard on Campus, the 1982 Orange Bowl game will be replayed free of charge. In addition, there will be a pep rally and free concert starting at 9:00pm Friday on Bowman field. Five bands will be performing including Shades of Grey and Backyard Green. All events are open to the public.

Around the state, Clemson fans are asked to wear all the orange that they can all week long. Wear it to work, to school, and at home. During the game originally, an event called Orange Out was being planned, in which Tiger fans would be asked to where nothing but orange to the game. In light of Tuesday’s tragedy however, fans everywhere, not just of Clemson, are asked to wear only Red, White, and Blue. Tiger fans attend games every Saturday dressed to support their team, this particular Saturday fans are asked to dress in support of their nation, and to honor those lost in the crisis of September 11th.