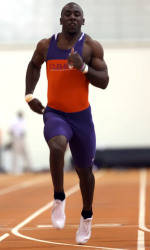 Blacksburg, VA – Clemson track & field wrapped up its final preparations for the NCAA Indoor Championships on Saturday in the Virginia Tech Qualifier at Rector Field House. Just one week away from the national meet, Saturday’s competition served as a final opportunity for several of Clemson’s student-athletes to attempt to earn qualification to the event.

Two-sport standout C.J. Spiller positioned himself for a possible at-large bid to the NCAA Championships after running a season-best time of 6.65 in Saturday’s 60m final. After a time of just 6.77 in the prelims, his hopes of making it to next week’s meet looked slim. However, his time in the final was just two hundredths shy of an automatic qualifying time in the event. Heading into this weekend, only 10 sprinters had earned automatic spots in the 60m dash. However, four more punched their tickets Saturday in the Virginia Tech meet alone. The NCAA will publish the accepted entries list Monday evening.

Trenton Guy came into today’s 60m race with hopes of qualifying as well, but he was guilty of a false start in the semifinals after a 6.68 time in the prelims. Guy’s 6.68 was a season-best time in the event. He did qualify provisionally in the 200m dash, clocking a 21.21 to place second in the event. His time ranks 10th best in Clemson’s indoor history.

Travis Swaggard competed in both the 200m and 400m dash events. In the 200m, he was sixth after a time of 21.49. He then improved on his personal best in the quarter mile, crossing the finish line in seventh place with a 47.68.

Other men’s athletes in action Saturday were George Fields and Josh Fowler in the jumps. Fields was 10th place in the long jump after a top mark of 24’1″. Fowler competed in the triple jump and had an indoor personal best mark of 49’7.25″. He was eighth Saturday, and his distance ranks as the ninth-best in school history.

The women’s team was led by the performance of Michaylin Golladay. She had a career day in the 60m high hurdles, clocking a time of 8.32 in both the semifinal and final rounds. She placed sixth in the event and improved on her personal best, where she now ranks second on the school’s all-time performance list.

Kristine Scott competed in both short sprints for Clemson. She did not advance to the final round of the 60m dash, but did finish fifth in the 200m dash. Her time was 24.06, just short of her personal best set last weekend at the ACC meet.

The Tigers had a few top-five finishes in the field events on the women’s side as well. Linda Buccholz was third in the high jump, while Nikola Lomnicka, the third-place finisher in the 20-pound weight throw (61’3″).

She finished one spot ahead of teammate Amy Morrison, who cleared 12’2.5″.

The NCAA Championships will be held next Friday and Saturday in College Station, TX.