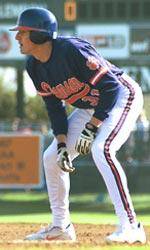 South Carolina Holds on for 8-6 Win over Clemson

CLEMSON, SC – South Carolina scored in each of the first five innings and held off Clemson for an 8-6 victory Wednesday night before 5,273 fans at Doug Kingsmore Stadium. The seventh-ranked Gamecocks improved to 29-8 while top-ranked Clemson, which won the first two games of the four-game intrastate series, dropped to 31-5.

Aaron Rawl (1-1) earned the win in relief for South Carolina and Blake Taylor got his ninth save of the year. Steve Reba (8-1) came in as a reliever and picked up his first loss since April 29, 2001.

Steve Thomas had a home run and three RBIs to lead four Gamecocks with two hits. Khalil Greene each had home runs and Chad Coder scored twice to lead the Clemson offense.

Freshman Jeff Hourigan, making his first career start, struck out the first batter of the game, but number two hitter Steve Thomas took the first offering he saw deep to left field to give the Gamecocks an early 1-0 lead. A solo shot by Brian Buscher put South Carolina up 2-0 before Clemson answered in the second inning with the hot bat of Michael Johnson. The junior first baseman cranked a solo home run that soared over the scoreboard in right center, his 16th home run of the year and third in two games. The homer was the fourth of the year for Johnson against South Carolina and his second off of Bell in 2002.

The teams traded runs in the third inning. Yaron Peters scored on a Buscher RBI-single and Steve Reba, who made his first relief apperance in over a year, got the Tigers out of the rest of the inning unscathed.

Clemson took its first lead of the game with three runs in the bottom of the fourth. With the bases loaded and one out, Hourigan, who stayed in the game as the designated hitter, scored on a wild pitch. Two pitches later, Collin Mahoney singled through the left side to score a run. David Slevin singled through the right side to plate Coder and give Clemson a 5-4 lead.

South Carolina took the lead back in the fifth inning after putting runners on second and third with two outs. Meyer tapped a ball to the right side of the mound but Reba bobbled the grounder, allowing Meyer to reach and a run to score. Thomas followed with a two-RBI double to left that made the score 7-5. Clemson looked to put up some more runs in the bottom of the frame after loading the bases with none out. However, South Carolina’s Aaron Rawl struck out Coder and got Mahoney to ground into an inning-ending double play.

The Tigers cut the lead to one in the sixth inning when Khalil Greene hit his 12th home run of the season, a solo shot to center field. South Carolina would not let up and scored one run in the eighth when Clemson reliever Paul Harrelson walked in a run with the bases loaded.

Taylor shut down the Tiger bats in the eighth and ninth innings to secure the victory for South Carolina.

Clemson will travel to Durham for a three-game series with Duke starting Friday. First pitch is set for 7:15 PM.