Thank you #clemsonfamily the support it is felt and so appreciated! Great match tonight and I’m excited for this team and the people in Jervey gym! #wecoming https://t.co/y3R4MRXIlA

The Gamecocks took the first set as South Carolina’s Mikayla Shields tallied five of her match-high 22 kills in the opening frame. With the score 22-20 in favor of the Gamecocks, Clemson had a chance to capitalize on Shields service error, but South Carolina took three of the last five points and the set, 25-23. Game No. 1 saw 11 tie scores.

In the second set, Clemson and the Gamecocks were once again neck-and-neck throughout the game. Both teams were tied 19-19 before South Carolina closed out the set on a 6-1 run to take a 2-0 lead heading into the break. Shields also rang up five kills on six attempts.

Coming out of the locker room, the Tigers swung momentum their way in large to Jori Radtke, who registered three service aces in the midst of an 8-2 Clemson run. Radtke finished the match with a career-high five service aces. All hopes of a Gamecock comeback attempt in the third were squashed by back-to-back Brooke Bailey kills to end the set, 25-19. Bailey tallied five of her 13 kills in set No. 3. 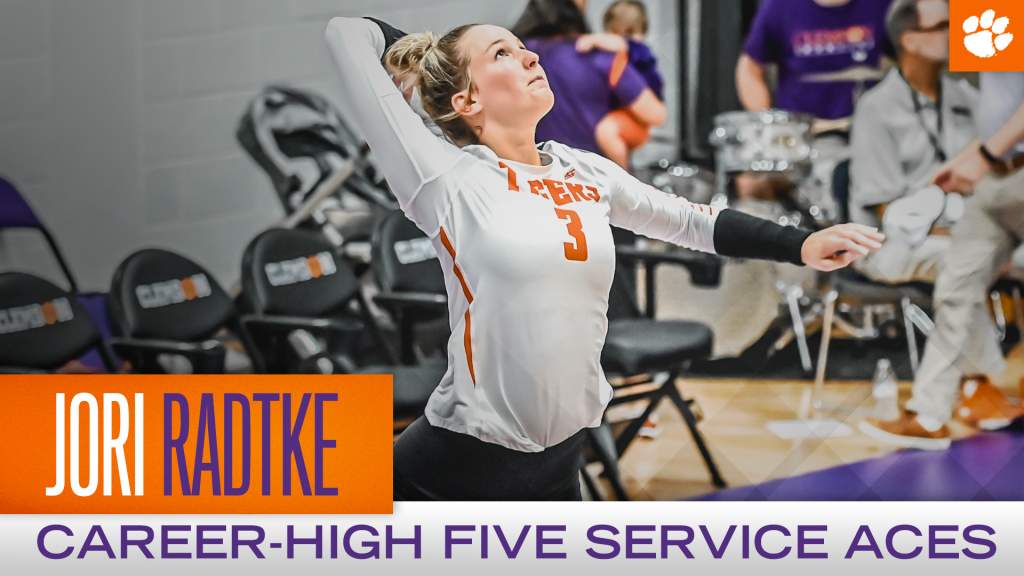 Carrying momentum into the fourth, Clemson jumped out to a 15-8 lead, which prompted South Carolina to utilize its second and final timeout midway through the set. The Gamecocks responded coming out of the huddle by firing off six unanswered points, which included four Clemson attack errors. With the score 20-19 in the Tigers’ favor, it was Clemson that formulated an unanswered run of four points, which gave the Tigers set point. After South Carolina cut the deficit to 24-22, Clemson head coach Michaela Franklin had seen enough and signaled for timeout. A kill from Kaylin Korte, who posted 12 kills on the night, sent the match into the deciding fifth set.

In the fifth, a Korte kill gave Clemson an 8-7 lead before the two teams swapped benches. Coming out of the media timeout, the Tigers could not re-gain their rhythm as South Carolina closed out the match on a 7-1 run, which included an overturned call on a Gamecock challenge to give the visiting team a three-point cushion and momentum. South Carolina then took the next two points to win the set, 15-10, and match.

Up next, Clemson (5-3, 0-0 ACC) returns to Jervey Gym Saturday, Sept. 14 as the Tigers host ninth-ranked Wisconsin (2-2, 0-0 Big Ten) at 3 p.m. ET. Saturday’s matchup against the Badgers is set to stream on ACCNX. All Clemson home regular-season matches in Jervey Gym are free general admission for the public. Additionally, the Gamecocks and Badgers will square off in the second match of the Clemson Classic tomorrow at 6 p.m. in Jervey Gym.