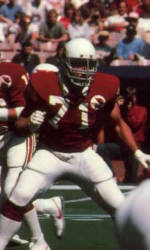 COLUMBIA, SC – To celebrate the 50th anniversary of the South Carolina Athletic Hall of Fame, the Board of Directors has announced the 2010 class of inductees which runs the gamut from football, basketball and baseball stars to swimming and tennis.

The Class of 2010 consists of University of South Carolina graduates Bill Currier, who played in the NFL, and Bob McNair, owner of the NFL’s Houston Texans; Clemson grads Horace Grant, who won four NBA titles, and Joe Bostic, who played in the NFL. Also being inducted are Paul Scarpa, Furman’s longtime coach who is the winningest active NCAA Division I tennis coach; MLB standout and Spartanburg native Wayne Tolleson in addition to Courtney Shealy Hart of Irmo, who took home a swimming gold medal in the 2000 Olympics; and Stan Smith, a longtime Hilton Head resident who won Wimbledon and the U.S. Open tennis titles.

The eight will be inducted to the state’s highest athletic honor on May 24, 2010 at the Columbia Metropolitan Convention Center. Tickets (table of eight for $500) and program sponsorships may be purchased by calling the SCAHOF office at 803/779-0905. The affair, which includes a reception, dinner and a silent auction of sports memorabilia, begins at 5:30 p.m.

In addition to the inductees donning of the symbolic blue jackets, the Bobby Richardson Sportsmanship Award recipient and the professional and amateur athletes of the year will also be honored. The affair, which includes a host of returning past inductees, is the largest annual celebration of Palmetto State sports stars under one roof. Legendary South Carolina State coach and 2008 SCAHOF President Willie Jeffries, known for his wit and witticism, will again preside over the banquet as master of ceremonies along with Executive Director Ephraim Ulmer and this year’s president, Andy Solomon, from The Citadel.

Courtney Shealy Hart A native of Irmo, Shealy Hart won two Olympic gold medals in swimming (400-meter relay and 400-freestyle relay) for the USA in 2000 after leading the University of Georgia to the NCAA team swim championships in 1999 and 2000. In 2000, she was named the NCAA Female Swimmer of Year after winning national titles in the 50-meter freestyle, the 100-meter freestyle and 100-meter backstroke. Shealy Hart also won NCAA titles in the 400-meter freestyle and 400-meter medley relay. She also excelled in volleyball while at Irmo and Georgia, and currently serves as an assistant swim coach at Georgia Tech.

Stan Smith A California native who has resided in Hilton Head since the 1980s, Smith capture the 1971 U.S. Open singles and 1972 Wimbledon singles titles, but it his 54 doubles championships, including five grand slams (U.S. Open in 1968, ’74, ’78 and ’80, and the 1970 Australian Open) and eight runners-up that rank him among the greatest players in tennis history. Additionally, he made 10 Davis Cup appearances. The three-time All-American from the University of Southern California collected the 1968 NCAA singles championship, and the 1967 and 1968 doubles titles. He was inducted into the S.C. Tennis Hall of Fame in 1985 and the International Tennis Hall of Fame in 1987. He continues to live on Hilton Head Island.

Wayne Tolleson Tolleson starred at Spartanburg High School and Western Carolina University in baseball and football, and played 10 years of major league baseball. In high school, he made the Shrine Bowl football team as a senior and became a standout wide receiver at WCU where he led the nation in pass receptions in 1978. On the diamond, Tolleson was named the 1977 Southern Conference¹s Baseball Player of the Year and as well as the league¹s Athlete of the Year. The slick fielding middle-infielder, who played second, shortstop and third during his career, began his MLB tenure with the Texas Rangers in 1981 and stayed with the organization through 1985. After a stint with the Chicago White Sox, he played for the New York Yankees. Tolleson enjoyed his best year as a hitter in 1985 with a .313 average, and finished his career with a .241 average and a .972 fielding average. With the Yankees, he won the New York Press Association’s “Good Guy Award” in 1987. He ranked eighth in the American League in stolen bases in 1983 with 33. Spartanburg High retired his jersey and he is a member of the WCU Athletic Hall of Fame.

Bob McNair A 1958 graduate of the University of South Carolina, McNair owns the NFL’s Houston Texans and a successful stable of thoroughbred racehorses based in Aiken. He and his wife, who hails from the Orangeburg area and attended Columbia College, are philanthropists, having donated millions of dollars to their alma maters and a multitude of charities. Committed to bringing a NFL team to the city of Houston, McNair formed Houston NFL Holdings in 1998 and on October 6, 1999, the NFL announced that the 32nd NFL franchise had been awarded to McNair and his Houston Texans debuted in 2002. McNair now serves as Chairman and Chief Executive Officer of The McNair Group, a financial and real estate firm that is headquartered in Houston, Texas.

Paul Scarpa An outstanding tennis player and coach, Scarpa is a member of the South Carolina Tennis Hall of Fame. In 41+ years of coaching, he has recorded a 729-448 record (and counting) to rank second among active coaches in career victories as he is only one of four coaches to reach the 700-win mark. He has coached Furman for 35+ years, compiling a career record of 216-32 for an impressive .871 percentage (and isn¹t finished). He has never had a losing season at Furman while winning 14 Southern Conference titles. During one stretch in the 1990s, Scarpa¹s teams won 25 consecutive league matches. He has been named SoCon Coach of the Year seven times, and South Carolina Coach of the Year once. In 1993, the NCAA adopted his dual-match scoring rules in what is now called the Scarpa System of Scoring. He has also invented and patented Tenex tape, which is used to mark clay courts around the world. As a junior player, the Charleston native tallied a No. 1 ranking in South Carolina, and No. 3 in the South. At Florida State, he played No. 1 and won the Eastern Collegiate championship. He became a member of the South Carolina Tennis Hall of Fame in 1986, and a member of the Furman Athletic Hall of Fame in 1994, and in 1996, Furman named its new tennis courts after him.

Joe Bostic Bostic played football for Clemson from 1975-78, and was part of the era that put the Tigers back on the college football map, helping them to three bowl appearances. He was the cornerstone of the offensive line and was a two-time All-American in 1977 and ’78. Bostic was selected to the first-team All-Atlantic Coast Conference both those years and was awarded the prestigious Jacobs Blocking Trophy signifying the best offensive lineman in the state of South Carolina in 1977 and 1978 and for the ACC in 1977. After his Clemson career, he was drafted by St. Louis and played 10 seasons for the Cardinals having been named to the NFL All-Rookie team. Bostic was selected to Clemson’s Centennial Team in 1996 and was inducted into the Clemson Athletic Hall of Fame that same year.

Bill Currier As a senior at the University of South Carolina in 1976, Currier was named the recipient of the Steve Wadiak MVP Award, the Bill Guerard Award for highest GPA, the Rex Enright Captain¹s Cup — the only player ever to win all three awards in one season. The three-year starter at defensive back participated in the Blue-Gray All-Star Game and was the Houston Oilers¹ ninth-round draft pick and made the NFL All-Rookie team. Currier enjoyed a nine-year NFL career, three at Houston, one with New England, and his final five with the New York Giants. Only five USC players have enjoyed longer NFL careers. As defensive captain of the Giants, Currier won the New York City Touchdown Club Unsung Hero Award for his community involvement. After his playing career, Currier returned to Columbia and became head football coach at Ben Lippen School, and currently serves as the school¹s director of athletics.