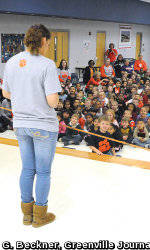 SOS Holds Be a T.I.G.E.R! Assembly at Westcliff Elementary

On Tuesday, November 18, Stacey Huddleston (women’s soccer) and Brittney Waller (women’s track and field) visited Westcliff Elementary School in Greenville, SC to speak to students from kindergarten through fifth grade. The assembly was a celebration of the school’s recent Penny Drive.

The entire school competed in the penny drive, either as a Clemson fan or a South Carolina fan, and they raised over $500 dollars for the Make a Wish Foundation. Clemson fans won the contest, and as a surprise guest, the Tiger joined the students in celebrating their accomplishments.

The assembly also included the T.I.G.E.R. Traits (T – Teamwork, I – Integrity, G – Gratitude, E – Education and R – Respect) and the students joined the Tiger and student-athletes as they acted out specific skits for each trait. This gave the students a chance to learn the traits and participate in each skit, as well as to take a school picture with the Tiger.