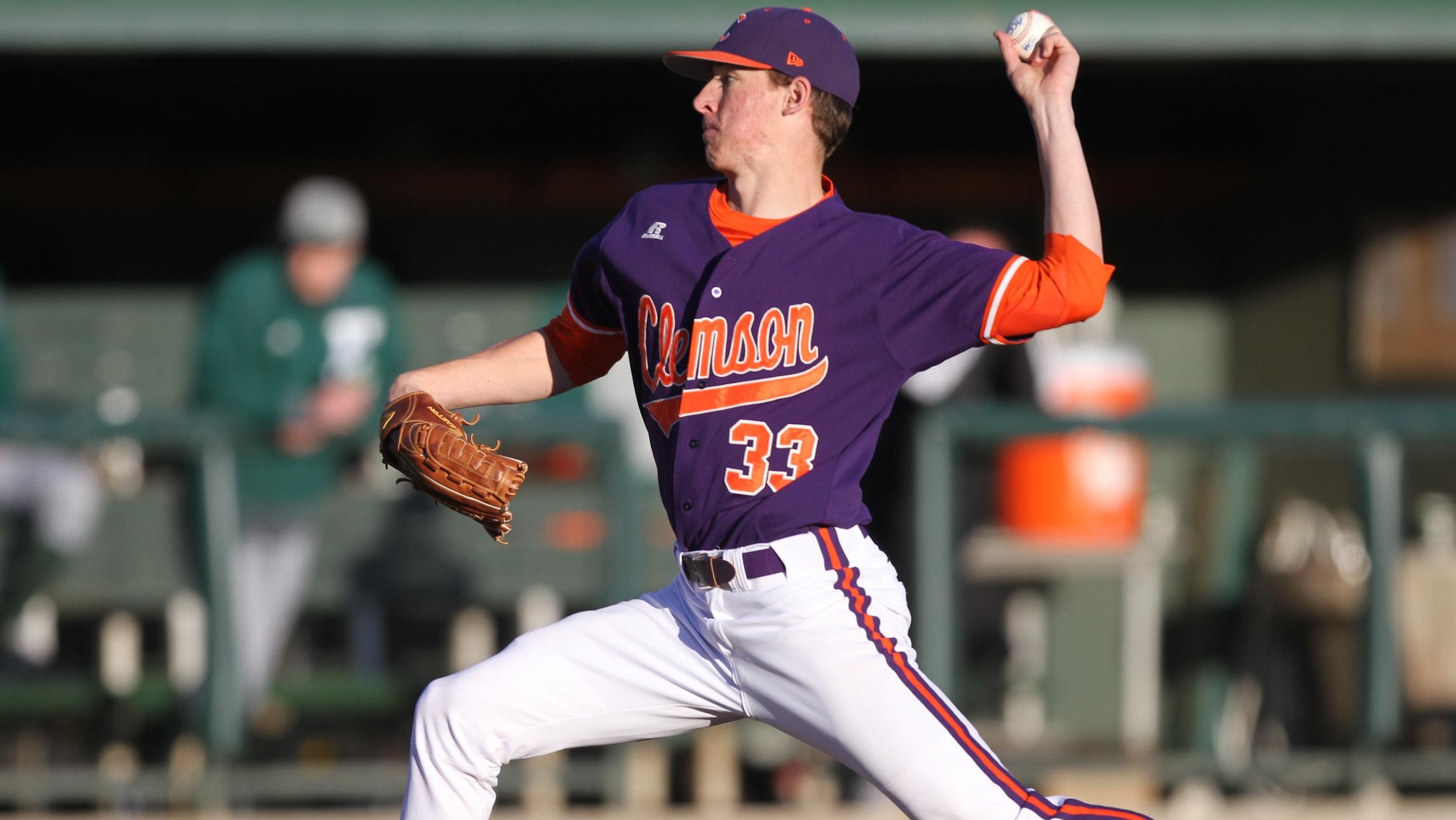 Sophomore lefthanders Matthew Crownover and Zack Erwin combined for 13 strikeouts and sophomores Tyler Krieger and Steven Duggar had three hits apiece to lead #13 Clemson to a 5-3 win over Eastern Michigan in front of 5,229 fans at Doug Kingsmore Stadium on Saturday afternoon. The Tigers evened the series and improved to 1-1 on the season. The Eagles fell to 1-1.

“We hit the ball really well today. I thought Crownover and Erwin pitched well. We played good defense and we had some timely hits. There are going to be a lot of games like this.”

The Tigers took the lead for good with two runs in the third inning and never relinquished the lead. Meanwhile, Crownover (1-0) earned the win by striking out a career-high nine batters in 5.0 innings pitched. The Ringgold, GA native also yielded just four hits, one earned run, and no walks.

Erwin gave up only three hits, no earned runs, and no walks with four strikeouts to record his first save of the season. He retired 10 of the last 11 batters of the game to close out the two-run victory.

Trailing 1-0, the Tigers broke through with a run in the second inning. Duggar’s leadoff double to right extended his hitting streak to 11 games. Jon McGibbon drew a one-out walk, then Jay Baum ripped an 0-2 pitch to center for a single to score Duggar. Andrew Cox‘s single loaded the bases with one out, but the Tigers failed to take the lead, as Tyler Slaton‘ deep drive to left-center was tracked down by Dae Bowden to end the inning and save three runs.

Krieger’s single, Garrett Boulware‘s double, and Duggar’s single scored two runs in the third inning to give the Tigers a 3-1 lead, then Clemson added a run to its lead in the fourth inning when Krieger laced a single to left-center to score Weston Wilson, who led off the frame with a single for his first career hit.

The Eagles scored single runs, both on two-out singles, in the fifth and sixth innings to narrow Clemson’s lead to 4-3, then Krieger responded with his third hit of the day, a single, with two outs in the bottom of the sixth inning to score Cox.

Krieger and Duggar both went 3-for-4 to pace Clemson’s 10-hit attack, while Krieger had a game-high two RBIs. The Tigers went 6-for-13 with runners in scoring position and put five of their eight leadoff batters on base, four of which scored.

Rubino and Longo had two hits apiece for Eastern Michigan, who had seven hits.

Clemson and Eastern Michigan will play the finale of the three-game series on Sunday at 1:00 PM. Fans who show the voucher on Twitter or Instagram at @ClemsonBaseball will receive a bag of popcorn for $2.