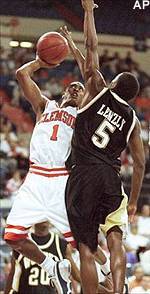 CLEMSON, S.C. – Will Solomon, So., Clemson For the second time in the 1999-2000 season, Clemson sophomore guard has been selected as the ACC Player of the Week, after leading the Tigers with 56 points in two conference games this past week. Solomon was Clemson’s leading scorer in both games, as he opened the week with a team-high 13 points in the Tigers’ 60-57 loss at Florida State, despite only playing 26 minutes in the contest.

The East Hartford, Conn. native followed that performance by hitting for 43 points, the most by a Tiger in 30 years, in Clemson’s game with Virginia on Saturday. In that game, Solomon tied the all-time Clemson single-game record by hitting eight three pointers, as he netted 29 points in the second half.

On the week, Solomon was an impressive 10-of-14 from behind the three-point arc and 18-of-31 from the field overall. To date, he leads the league with a scoring average of 22.3 points per game, and is hitting an average of 3.3 three-point field goals per contest.