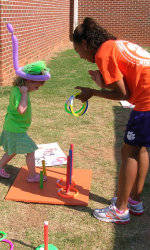 After unprecedented fall and spring semesters, SOS is beginning to wrap up the 2009-10 year. On Wednesday, April 21, Clemson University student-athletes concluded their visits to Mt. Lebanon Elementary in Pendleton, SC. Different teams visited the school once a month to read to students and promote literacy and good character. This month, Taylor Hoynacki represented the rowing team and read two books to a kindergarten class.

Wednesday also marked the culmination of the first Be a T.I.G.E.R.! Book Club at Homeland Park Elementary School in Anderson, SC. A group of 17 elementary school students read the book, “Crash”, by Jerry Spinelli. The book dealt with topics relevant to their age, such as bullying and tolerance. Mairi Trimboli (rowing) met with the group three times throughout the year to lead discussion sessions.

SOS participated in its last major event of the year on Friday, April 23. The Area 13 Spring Games for Oconee and Pickens Counties were held at the Clemson University Track & Field Facility from 9:30 AM-12:00 PM. The ceremony commenced with a motivational speech given by Head Women’s Basketball Coach Itoro Umoh Coleman, and was followed by the lighting of the torch. Jumping rope, making thank-you notes, coloring, football tossing, ring tossing, bowling, soccer dribbling and hula hooping were a few of the activities that took place at the Olympic Village and allowed Special Olympic athletes to relax and interact with Clemson student-athletes between their competitive events.