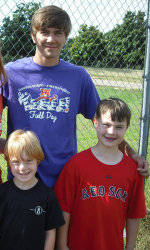 The Solid Orange Squad participated in two events this week; visited the Foothill’s YMCA for Camp ONEOT and East End Elementary school in Easley, SC on Tuesday and Thursday, respectfully.

On Tuesday, June 8, the Solid Orange Squad went to the Foothill’s YMCA to talk to the campers of ONEOT during their Super Heroes week about what it means to be a hero within the community. Three student-athletes, Cassie Self, Candace Sapp and Chad Holt, spoke to children from kindergarten through sixth grade about sports heroes, community heroes and the characteristics of a hero. The kids then sang camp songs and played kickball with the student-athletes.

On Thursday, June 10, members of SOS visited East End Elementary School in Easley to talk to fifth grade students about the importance of graduating and continuing their education at the middle school level. The student-athletes – Chris Slate, Cassie Self and Candace Sapp, set up a booth where the students could visit with the athletes, read the Be a T.I.G.E.R! newspaper and have their faces painted.

Next week, SOS will travel to Seneca Middle School to speak to students in the repeat student program on June 16. Then, on Friday June 18, Clemson’s Director of Community Relations, Linda White, will invite children from Helping Hands to her house to interact and play with Tiger student-athletes.