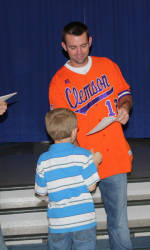 Six Mile Elementary: Casey Harmon and Wilson Boyd of the baseball team traveled to Six Mile Elementary on Tuesday, November 10 to honor the school’s MVPs of the month. One student from each homeroom was selected by their teacher for the award.

The athletes talked with the students about what it means to be a valuable member of a team and the value in demonstrating good character. The athletes also passed out certificates of recognition to approximately 25 students.

Ally Young, guidance counselor at Six Mile Elementary shared, “I just wanted to say a special thank you for coming to our school on Tuesday. The students were so excited and enjoyed hearing from the two baseball players.”

Calhoun Academy: Students from Calhoun Academy of the Art’s fifth grade class visited Clemson University on Tuesday, November 10 to learn about Clemson athletics’ character education program, Be A T.I.G.E.R.! The students were welcomed by Solid Orange Squad members who volunteered their time to teach the students about teamwork, integrity, gratitude, education and respect.

The students broke up into small groups and each athlete led a discussion about the tiger traits and the benefits of receiving a higher education. Following the discussion, the athletes took the students on a tour of the athletic facilities. Over 100 students took part in this event.

Barbara Koch, fifth grade teacher at Calhoun Academy, remarked “Thank you so much for sharing your “Be a Tiger” program with our students today. Our children were thrilled to see where their favorite Tigers learn, work out and compete. It was also a great opportunity for our students to experience a college campus. Many of our students come from non-professional homes, and it was a chance to introduce them to college as an option in their futures. Your athletes were excellent representatives for Clemson and very patient tour guides for our students. I hope we will be able to visit again next year.”

Iva Elementary: Kerry McLaughlin (swimming and diving) and Mairi Trimboli (rowing) visited Iva Elementary on Tuesday, November 10 to present Clemson’s character education program Be A T.I.G.E.R.! The athletes presented the program through an interactive assembly where students had the opportunity to partake in skits and games that reinforced the character traits of teamwork, integrity, gratitude, education and respect. The Tiger mascot made a surprise appearance and was a huge hit with the students as he participated in the skits and demonstrations. Over 430 students attended the assembly.

Stone Academy: On Wednesday, November 11, Taylor Hoynacki, Melissa Weaver and Michelle Nance of the rowing team traveled to Stone Academy to speak with a special group of students in the school’s F.A.M.E. program. F.A.M.E. stands for Females Achieving More through Education and is a leadership development program designed to provide mentors and positive role models for “at-risk” fourth and fifth grade students. The athletes encouraged the group of approximately 15 students to set goals and demonstrate good character, and stressed the importance of education.

Carlos Littlejohn, Administrative Assistant at Stone Academy remarked, “Thanks, again for allowing the athletes to come and speak to our F.A.M.E. students. They were awesome and our girls definitely enjoyed talking with them.”