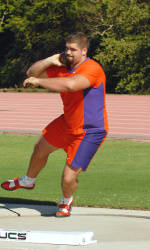 Clemson, SC – Five members of the Clemson men’s track & field team posted first-place finishes Saturday at the women’s Solid Orange Classic event. The start of the meet was delayed for well over an hour due to lightning in the area as well as heavy rain at times.

Kendall Millhouse won the 100m dash title with a time of 10.75 in the final. He had the top time in the prelims as well at 10.74, which marked a season-best for the freshman out of Summerville, SC.

Matt Hughes and Matt Bruce dueled for first place in the 1500m run. Both natives of Oshawa, Ontario, Hughes got the best of Bruce on Saturday. He posted a time of 3:57.61, ahead of Bruce’s crossing time of 4:00.80. Sam Bryfczysnki dropped out of the race early. Jasen Turnbull had a season-best in the 800m run with a time of 1:54.93.

Andrew Porter had hopes of posting his first regional-qualifying time of the season in the intermediate hurdles, but settled for second place and a time of 54.95 in the event. He was a regional qualifier last season.

Zach Berg won the hammer throw title Saturday afternoon, but it did not come easily for the red-shirt sophomore. He fouled on his first two attempts, then qualified for the finals is last throw. He then fouled on his next two attempts before ending the day with a solid toss of 178’9″. It marked a season-best in the hammer for the native of Tega Cay, SC.

Scott Pauga was fifth in the javelin throw. The sophomore had a top distance of 168’4″ on his third throw of the prelims. He also competed in the high jump, where he placed third after a clearance of 6’4.75″.

Alex Padgett was the fifth winner for the Tigers on Saturday. The red-shirt freshman had a throw of 51’8.5″ in the shot put to hold off Patrick Morris of Western Carolina and Matt Knippen of Gardner-Webb. Padgett’s best throw was his third attempt of the prelims.

The men’s team will return to action next weekend for the ACC Outdoor Championships, which will be held April 17-19 in Atlanta, GA at the Georgia Tech facility.