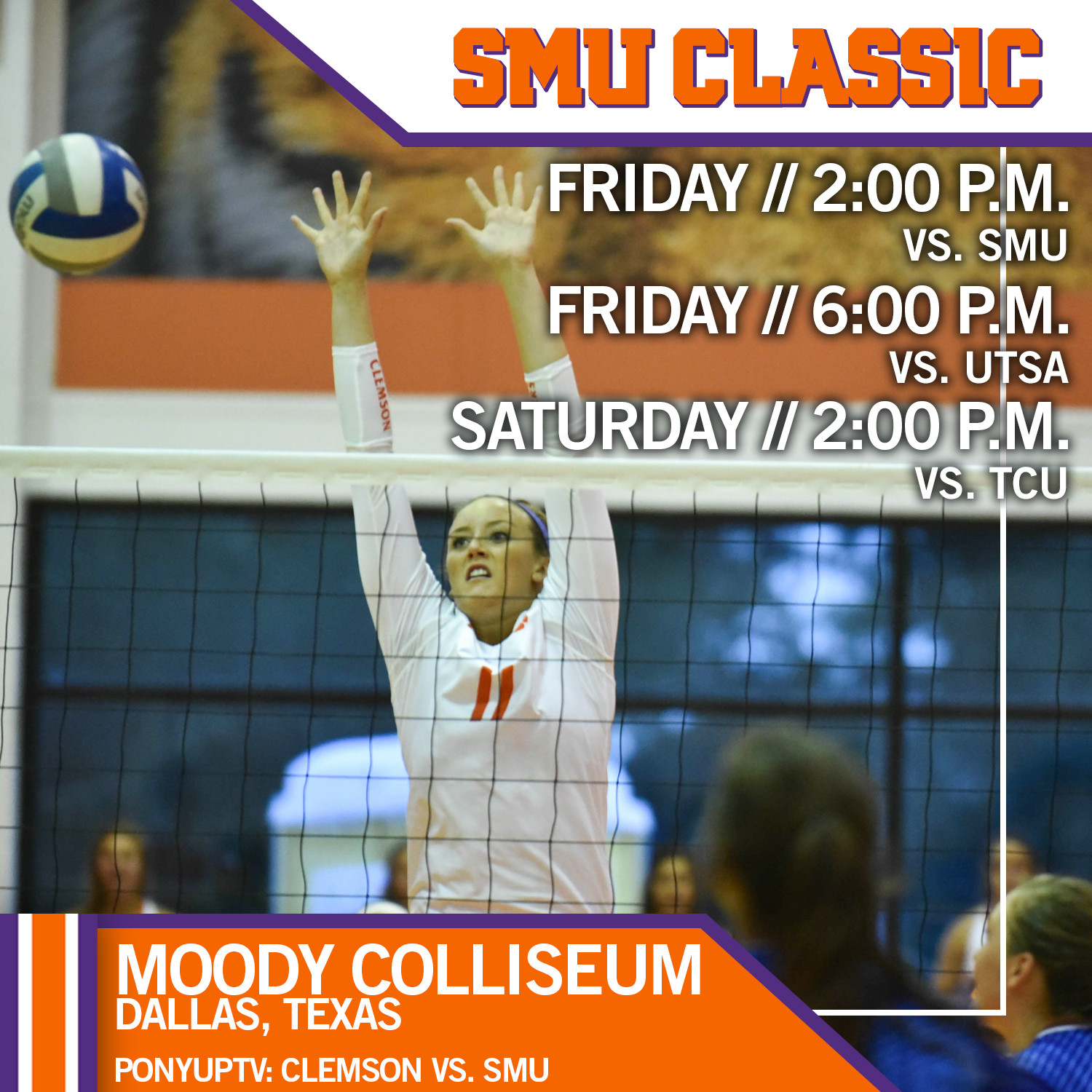 DALLAS, Texas – This weekend, the Tigers (5-4) take their four-match win streak to Dallas, Texas for the SMU Classic. The final tournament of the season presents Clemson’s toughest test yet as it will take on SMU, UTSA and TCU.

The SMU Mustangs are currently receiving votes in the AVCA Coaches Poll due to their 7-2 record and a victory over No. 21 San Diego. UTSA has caused a stir in the volleyball community after its four-set victory over No. 12 Oregon last weekend. The Roadrunners are 8-3 on the season. TCU is currently 8-1 in 2015 with its only loss coming against San Diego.

“This weekend is going to be a great challenge for us,” head coach Hugh Hernesman said. “We’re playing three very good teams- two of which had Top 25 wins last weekend.  It’s a very good tournament to help get us ready for what will be a grueling ACC season.”

Even with the difficult week ahead, Coach Hernesman excited to see how the Tigers improve this week as the young Clemson program has already shown progression three weeks into the season.

“I’m really pleased with what we’re starting to see from some of our younger players,” Hernesman said. “Kailey had a great weekend last weekend.  She almost hit .300 on the weekend, killed the ball at about 40% and only erred at about 11%.  Those are some pretty good numbers and show a lot of grow from her in the last 3 weeks of play.”

It was Harvell’s most impressive weekend so far as the freshman continues to play to the level of experienced offensive threat, Leah Perri. After Perri lit up ETSU for 20 kills, Harvell converted on 11 of her 23 attacks for a .391 hitting percentage in the three-set victory over Presbyterian.

The two accounted for 23 kills the next day as the Tigers defeated USC Upstate to win the Clemson Classic. The duo was named to the All-Tournament Team with Perri being honored as the MVP.

Another freshman that has made great strides in her play since day one is Sofia Hruby. The freshman middle blocker from Austin, Texas enjoyed her best weekend thus far, hitting .429 with 18 kills and 13 blocks.

“Sofia hit almost .450%, killed it around 55% and only erred at 9% in addition to averaging over 1.4 blocks per set.  If they can continue to produce at that level, that is going to bode well for our offense.”

Kennedy Wilson-Talmadge showcased her athleticism this weekend in from of the home crowd, digging 17 balls and making some high-effort plays in the process.

“Then Kennedy, I thought, did a real nice job in the back court.  She passed real well and makde a lot of defensive plays due to her speed and has the potential to add a big spark for us.”

Wilson-Talmadge’s play allowed Keelie Arneson to fill in where the Tigers needed her most, leading to her 46 digs on the weekend, moving her close to the NCAA’s list of all-time career digs leaders.

Kate Federico was just two assists away from recording 100 on the weekend, The setter finished the Clemson Classic with 98 assists, 15 kills, 24 digs and four blocks.

Notes (in 140 characters or less) • Clemson’s eight freshmen is the highest total in the Atlantic Coast Conference.• Hugh Hernesman is the ninth head coach in Clemson volleyball history.• Leah Perri headlines the Clemson attack with 746 career kills, she ranks seventh in the conference with a 3.66 kills per set average.• Leah Perri is tied for third in the ACC with 4.38 points per set.• Leah Perri has double-digit kills in all but one of the nine matches this season.• Keelie Arneson is 109 digs away from cracking the NCAA’s all-time list of digs leaders.• If Keelie Arneson duplicates her ‘13 performance (712 digs) she will have the second most digs ever recorded in D-I women’s volleyball.• Keelie Arneson currently leads the ACC with a 5.30 digs per set average.• Keelie Arneson’s 5.30 digs per set average ranks her 19th in the nation.• Kate Federico ranks fifth in the conference averaging 9.41 assists per set.• Kate Federico has four double-doubles this season and six matches with 30 assists or more.• Kate Federico’s 1,171 assists last year are the second most ever recorded by a Clemson freshman.• Kate Federico’s 1,171 assists in 2014 was the second highest total in the ACC and the most recorded by a freshman.• Kate Federico’s 1,171 assists are the most recorded by a Tiger in the last five years.• Sofia Hruby is coming off her best blocking effort yet against USC Upstate with seven.• Kailey Harvell has recorded 10 or more kills in seven of nine matches this season.