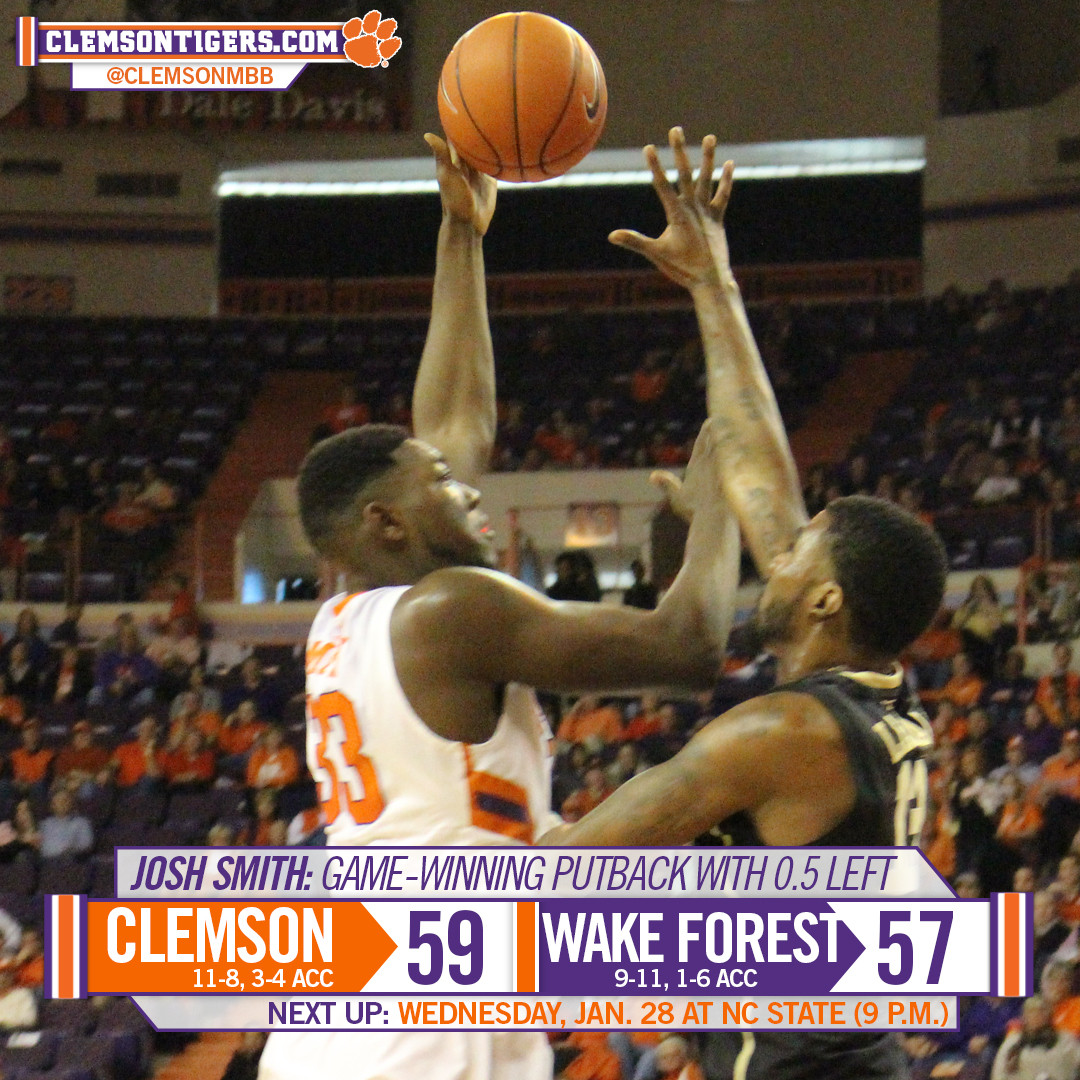 CLEMSON, S.C. — Trailing for over 37 minutes in the game, a putback by Josh Smith with 0.5 seconds remaining gave Clemson a 59-57 victory over Wake Forest on Saturday afternoon in Littlejohn Coliseum.  The Tigers improved to 11-8 overall (3-4 in the ACC) and the Demon Deacons fell to 9-11 (1-6).

With the Tigers leading 57-56, the Demon Deacons marched down the court with under a minute remaining and Wake Forest forward Devin Thomas was able to draw a shooting foul on Landry Nnoko — his fifth and final foul. Smith was inserted to replace the Tiger center.

After hitting the first free throw, the Demon Deacons secured the rebound on the second attempt and with just 33 seconds remaining on the clock. But a steal by Rod Hall allowed the Tigers to regain possession. With 23 seconds remaining, Head Coach Brad Brownell called a timeout and devised a play that allowed Hall to drive to the basket with only a few ticks left. Executed perfectly, Hall was able to penetrate, but missed the layup. With the defense collapsing on the senior point guard, Smith was able to sneak in and not only snag the rebound, but lay the ball into the basket for the final points of the ball game.

“I definitely thought that was Rod (Hall) was going to get the shot off because that was what the play was, but it was up to everyone else to crash the boards,” Smith said. “I couldn’t think; I wasn’t thinking at all, I just grabbed the ball and put it back in.”

Brownell was very complimentary of the poise displayed by Smith down the stretch.

“It’s a good example to the other guys,” Brownell said. “You never know when your time is going to come. This game is funny; that it’s going to present an opportunity for you and obviously you have to take advantage of it. He stayed with the play and tipped it in. It was a great second effort by him, and I’m just happy for him because I know how hard he’s worked for three years.”

A recurring theme, the Tigers struggled out of the gate and were forced to mount another comeback. The Demon Deacons led 13-2 with 12:29 remaining in the first half, but the Tigers slowly cut the lead to a one-possession game, but Wake was able to stretch the lead to 33-27 at intermission.

At one point it appeared that the game would head the direction of Florida State — the Tigers constantly clawed back into the game, but whenever Clemson was within striking distance the Seminoles extended the lead once again, but clutch free throws down the stretch spelled a different outcome against the Demon Deacons.

Freshman Donte Grantham led the scoring for the Tigers, finishing the afternoon with 13 points and seven rebounds. Thomas paced the Demon Deacons with 17 points.

The Tigers travel to Raleigh on Jan. 28 for a late 9 p.m. tipoff against the NC State Wolfpack.

[View the story “Clemson vs. Wake Forest” on Storify]