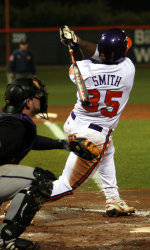 Senior third-baseman Marquez Smith hit a grand slam in the seventh inning to highlight #17 Clemson’s 7-6 come-from-behind victory over Boston College in the second game of a doubleheader in front of 5,533 fans at Doug Kingsmore Stadium on Sunday. With the win, Clemson won the series 2-1. The Tigers also improved to 31-16 overall and 15-9 in the ACC. The Eagles fell to 21-25 overall, 12-15 in ACC play.

The Tigers were led offensively by Smith, who went 3-for-4 with a two-run homer, grand slam, double, and a career-high six RBIs. Addison Johnson collected two hits as well.

Jared McGuire went 3-for-4 for the Eagles with two RBIs and two runs scored. McGuire also was also 8-for-11 (.727) with two homers and four RBIs in the three games after entering the series with a season batting average of .241. Tony Sanchez and Joseph Ayers each had two hits and one RBI apiece.

The Tigers broke through with three runs in the third to grab the lead. Leadoff batter Alex Lee doubled to left-center, advanced to third on a groundout by Johnson, and scored on a wild pitch. With two outs, Wilson Boyd singled to right. Smith then sent a towering two-run homer to center to put the Tigers ahead 3-0.

The Eagles quickly responded to tie the score in the fourth. With one out, McGuire singled down the right-field line and advanced to second on a wild pitch. Eric Campbell then drew a walk and McGuire went to third on a wild pitch. Michael Belfiore then scored McGuire on a sacrifice fly to right. Sanchez followed with a double to left-center to score Campbell. Joseph Ayers then drove home Sanchez with a single up the middle.

Boston College added three more runs in the fifth. Peter Frates reached first on a fielding error by shortstop Taylor Harbin to lead off the frame and moved to second on a sacrifice bunt by Ryan Hutchinson. Johnny Ayers then singled to center, scoring Frates. McGuire followed with his fifth long ball of the season, a two-run homer to left-center, to put the Eagles ahead 6-3.

In the seventh inning, after the first two batters were retired, J.D. Burgess drew a walk. Johnson followed with a single to center and Boyd walked to load the bases. Smith then crushed a grand slam to center to put the Tigers on top 7-6. It was Smith’s second long ball of the game and 10th of the year.

Clemson will play Wofford at West End Field in Greenville, SC on Tuesday at 7:15 PM.