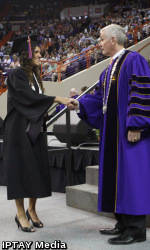 The list of football players earning a degree, included former All-American Justin Miller, who earned his degree eight years after he played his final game for the Tigers. Miller, who turned professional after his junior year, returned to Clemson to earn his degree in sports management. He joins Michael Dean Perry, Levon Kirkland and Lucas Glover on the list of All-America athletes who have returned to Clemson to get their degrees after or during their professional careers.

Also earning an undergraduate degree today were active Clemson football players Xavier Brewer and Brandon Ford. That will give Clemson five current football players who have their degrees when the Tigers open the 2012 season against Auburn in the Georgia Dome. Dalton Freeman, Rashard Hall and Jaron Brown earned degrees earlier. More could be added to the list after the August graduation.

The Clemson men’s swimming program had eight graduates on Friday, including Seth Broster, a chemical engineering major who won an NCAAA Postgraduate Scholarship this year.

The story of the day belonged to Clemson women’s tennis athletes Josipa Bek and Keri Wong. The tennis players began the day helping Clemson to a 4-0 victory over Arizona State in the NCAA Women’s Tennis Tournament in Athens, GA. It was Bek’s 223rd career win, tying Jodi Trucks (1980-84) for the all-time school record for combined singles and doubles wins in a career. Wong got her 220th career win to rank third.

After the match they drove with their parents, back to Clemson to go through the 6:30 PM graduation ceremony at Littlejohn Coliseum. At the conclusion of the ceremony they were to drive back to Athens to get ready for Clemson’s second round match Saturday at Georgia.

Clemson starting designated hitter Phil Pohl could also have an active weekend of ceremonies and athletic events. He graduated on Friday and then will begin a three-game baseball series against the nation’s number-one team, Florida State, one Saturday night. Pohl is a finalist for the Lowe’s Senior Class Award this year.