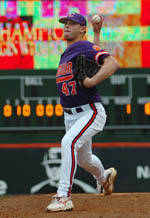 Michael Schwimer (3-0) earned the win for the Cavaliers, pitching 2.2 scoreless innings of relief without giving up a hit. The junior righthander struck out three and walked one. Casey Lambert notched his ninth save of the season, keeping the Tigers scoreless in the ninth inning.

After seven scoreless innings, Virginia broke through with a run in the eighth. Leadoff batter Patrick Wingfield reached on a throwing error by Marquez Smith and advanced to second on the error. With one out, pinch-hitter Tim Henry singled on a 1-2 pitch to left-center to plate Wingfield and score the game’s first run.

The Cavaliers then tacked on two runs in the ninth inning. With one out, David Adams singled through the right side. Beau Seabury then doubled to left-center, plating Adams. Tyler Cannon then drove in Seabury with a double to right-center to put Virginia on top 3-0.

The Tigers threatened in the bottom of the ninth when Wilson Boyd hit a two-out single through the left side. J.D. Burgess and Brad Chalk each drew a walk to load the bases and put the potential tying run on first base. But D.J. Mitchell struck out looking to end the game.

Henry, Seabury, and Cannon each drove in a run to lead the Cavaliers offensively. Taylor Harbin collected a team-high two hits for the Tigers. Clemson was 0-for-10 with runners on base and stranded 11 runners on base.

Virginia and Clemson will conclude the series on Sunday at 1:00 PM.