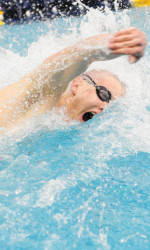 KNOXVILLE, TN – Six former Clemson swimmers will compete in the 2012 United States Olympic Trials after an array of fast swims at the Swim and Tri Olympic Trials Qualifying Meet at the Pilot Aquatic Club in Knoxville, TN this past weekend.

Seth Broster, Eric Bruck, Harry Foster, Chris Reinke and Mark Schindler all competed at the meet, which was held at the University of Tennessee. Among the top performers in the 50 freestyle were Bruck, who won the event with a time of 23.20 seconds, and Broster, who posted a 23.48-second swim in the event to qualify. Schindler swam the 100 breaststroke in 1:04.67 to qualify for the Olympic Trials in the event. Foster also qualified with a time of 55.18 seconds in the 100 butterfly, placing second in the event.

“This group of men are a part of the top 25 recruiting class of 2012 that made Clemson history,” Head Coach Christopher Ip said. “They have rewritten the record books on the way to the school’s highest-ever placing at the NCAA Championships in 2011. They are all still helping our athletic department demonstrate the university’s competitiveness across all sports.”

The U.S. Olympic Trials will take place from June 25-July 2 in Omaha, NE.

In addition to the seven American participants, Chris Dart will also be competing for a spot on the British Olympic team. He is planning to swim the 100 backstroke at the ASA British National Meet in two weeks with one additional spot on the British squad on the line.