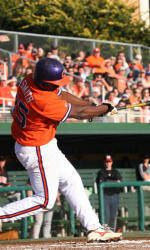 Western Carolina scored six runs in the second inning and held on to defeat #7 Clemson 8-6 in front of 3,773 fans Tuesday at Doug Kingsmore Stadium. The Catamounts, who had dropped their last 35 games at Clemson dating back to 1974, improved to 18-11, and the Tigers fell to 20-8.

Brian McCullen (4-1) pitched 2.2 innings of relief, and allowed three runs on two hits to earn the win for the Catamounts. Matt Vaughn (0-1) surrendered six runs (five earned) on five hits in 1.0 inning pitched to take the loss in his first career start.

Demmink doubled to center to lead off the first, and moved to third on a sacrifice bunt by Brad Chalk. It was the 25th sacrifice bunt of Chalk’s career, which tied the Clemson record for sacrifice bunts in a career. With two outs, Tyler Colvin tripled down the right field line to score Demmink.

Blake Murphy singled to lead off the second and went to second on a passed ball. Greene doubled to left-center to score Murphy, and went to third on a wild pitch. Donnie Wilson walked, and Grey Gregory had a bunt single down the third-base line to load the bases. A balk scored Greene, and Jason Haynes walked. Hallam followed with a sharp single off the glove of Taylor Harbin at second base to score Wilson. Barrett Shaft reached on a fielder’s choice grounder, and Stan Widmann dropped the ball on his way to tag second base, as Hallam slid in safely. Steven Strausbaugh then singled to left to score Haynes, and end the night for Vaughn. P.J. Zocchi came in and got Trey McDaniel to hit a sacrifice fly to right that scored Hallam, and struck out Murphy and Greene to end the inning.

Storrer hit a one-out home run down the right field line in the fourth, his second long ball of the season.

The Catamounts added to their lead in the seventh. McDaniel doubled down the right field line to lead off the inning, which ended the night for Zocchi. Stephen Clyne hit Murphy with a pitch, and McDaniel moved to third on a bunt by Greene, but Murphy was erased at second. Western Carolina then executed a double steal, and Harbin’s throw home to attempt to retire McDaniel sailed over the head of Adrian Casanova, allowing Greene to reach third. A grounder by Wilson bounced off the glove of Widmann, allowing Greene to score.

Clemson scored four runs after the first two hitters were retired in the seventh. Chalk drew a two-out walk, and Harbin then swung and missed on a two-strike wild pitch, which allowed him to advance to first. Colvin walked to load the bases, and Andy D’Alessio hit a two-run single down the right-field line to score Chalk and Harbin. Smith got the Tigers closer with a double down the left field line that scored Colvin and D’Alessio, as Wilson bobbled the ball in the corner. Storrer hit a sharp single to right, and then stole second to put the tying run in scoring position, but Widmann struck out to end the inning.

Zocchi had a career-high seven strikeouts in 5.0 innings of relief.

Clemson and Western Carolina will play again next Tuesday April 11 at 7:00 PM in Culowhee, NC.

Clemson returns to action Wednesday night as it visits South Carolina at 7:00 PM. The game will be televised live by CSS.