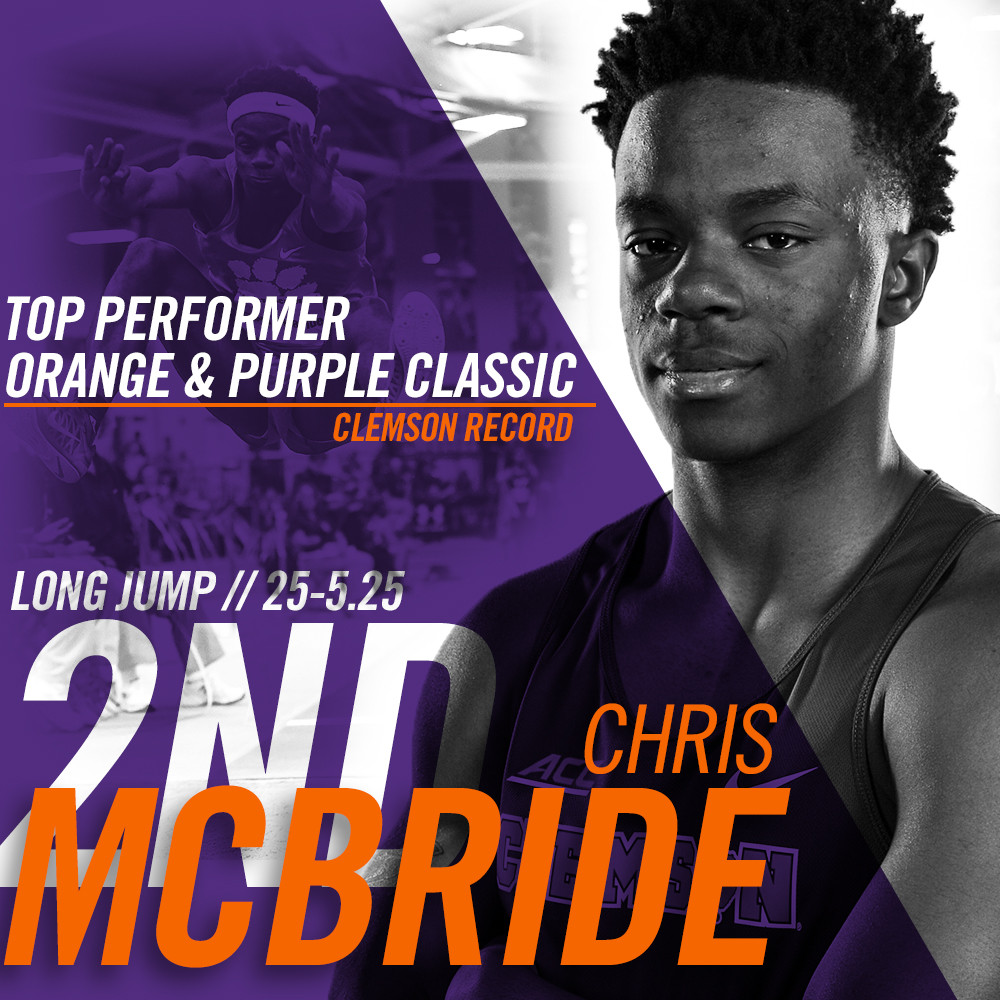 CLEMSON, S.C. – Constructed to be the fastest track in the country, Clemson’s new indoor track did not disappoint in its debut as six total records were broken during the Orange & Purple Classic. The Tiger’s top performance came in the field as sophomore Chris McBride claimed Clemson’s program record in the long jump.

Five facility records fell on Saturday afternoon and altogether, there were nine competitors who finished with times better than the previous facility records. The women’s 200m, 300m and 500m were all topped as well as the men’s 200m and 300m. The highlight of the meet came in the women’s 300 meter dash as Quanera Hayes and Candace Hill each claimed American records. Hayes won the event in 35.71 to break the previous record of 37.65 set in 2005 and claim the American record while Hill claimed the American junior record with a time of 36.86. Former Clemson great, Tevin Hester shattered the men’s 200m facility record in his return to Tiger Town as a pro, clocking in at 20.96.

In his first meet since the 2016 Indoor ACC Championships, McBride claimed Clemson’s long jump record by half an inch, leaping 25-5.25. The sophomore’s mark surpasses the previous record of 25-4.75 that was set by George Kitchens as a senior. After his time at Clemson, Kitchens went on to become an Olympian and compete for Team USA. McBride’s mark was second to Florida’s KeAndre Bates’ who is a three-time USTFCCCA Indoor All-American for the Gators. Bates’ first place effort was 2.75 inches better than McBrides’, measuring 25-8.

On the women’s side, Olivia James and Rebekah Smith each turned in remarkable efforts on the track. James now owns the Clemson Indoor Track & Field Complex facility record in the 500 meter run after clocking in at 1:11.62 to win the event. Freshman, Lakeisha Warner wasn’t far behind in fifth at 1:13.36. Smith won the women’s 60 meter dash in her collegiate debut with a time of 7.33, placing her sixth in Clemson history. She was followed closely by Angelica Collins in second at 7.44, tying her personal best. Torie Robinson took seventh in the final after running a 7.36 in the prelims to tie Sabria Hadley for seventh all-time in program history. Hadley ran the 300 meter dash and took fourth, clocking in at 38.44.

Smith struck again in the 200m dash, placing third with a time of 24.65 with Ebony Williams right behind her in fourth at 24.68. Williams also took fifth at 8.46 in the 60 meter hurdles behind Markeeta Thomas who finished the event fourth in 8.45. Ersula Farrow also finished with a top-four time in the 400m at 56.19 while Alexa Womack was the runner-up in the mile at 5:05.36.

Kirk Lewis also ran one of the fastest times in Clemson history in the preliminaries of the 60 meter hurdles when he crossed the finish line in 7.75. The time stands as the sixth best time in program history. He later finished second in the final with a time of 7.93.

Freshman, Trevious Frazier impressed for the men in his debut when he finished the 200 meter dash in 21.63 to take fourth place with Alex Sands trailing in sixth at 21.74. Chad Fennell paced the Tigers in the 500 meter run with a time of 1:04.77 with Deron Gordon following closely in sixth at 1:04.88. Jacob Slann finished third in the mile at 4:17.62.

In the field, Iana Amsterdam opened up the season with a solid jump of 19-5.5 in the long jump to take fifth place. On the men’s side, Grant Voeks took fourth place, throwing 48-9 while Jordan Pickerel was fifth in the weight throw with a mark of 54-4.

The Tigers are back in action next week on Saturday, January 14 when they host the Clemson Invitational.