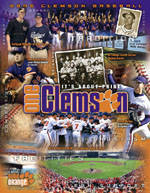 Six Clemson athletic media guides ranked among the top 10 in the nation in their respective sports categories according to CoSIDA publications contest awards presented earlier this month at the organization’s annual convention on Philadelphia.

The Clemson baseball award had the highest national ranking with a #2 listing according to the national judging. The cover was also given a citation as the top baseball cover in the nation. Clemson baseball SID Brian Hennessy edited and designed the publication.

The Clemson men’s golf guide ranked sixth in the nation among all golf media guides and was edited by Sports Information Director Tim Bourret and designed by Andy Heck.