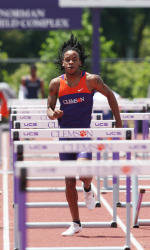 Sinkler, competing in the first meet of her final season in a Clemson uniform, was on top of her game. She won the long jump Friday with a solid mark of 20’5.25″, despite the short approach. She then went out and got the best of teammate Jasmine Brunson in a competitive triple jump Saturday. Sinkler jumped 43’0.5″ with a fair wind, while Brunson hit a mark of 42’11”.

The 4×100 relay team of Brianna Rollins,Dezerea Bryant, Marlena Wesh and Jasmine Edgerson combined to a time of 43.50, breaking the school record (43.54) set just last season at the NCAA Outdoor Championships. The group did it without ACC champion Stormy Kendrick, an outstanding feat. Monique Gracia was Clemson’s top finisher in the 100 hurdles as well with a time of 13.36.

Marlena Wesh was solid on Saturday with a time of 52.60 in a winning effort for the open 400-meter dash. She led five Tiger females in the event. Nia Fluker, one of Clemson’s other best 400 runners, actually ran the 800 on Saturday and placed 10th at 2:12.30.

Marcus Maxey won the men’s 110-meter hurdles. The junior hailing from Athens, GA had a time of 14.06 with an even wind reading. Adams, an indoor All-American in the high hurdles, focused on the 400 hurdles Saturday and was third place with a time of 53.05.

Brittney Waller was fifth in the women’s discus, hitting a mark of 162’9″. Marcus Brown was the top thrower among the men’s team, finishing sixth in the shot put with a throw of 52’3.75″.

Gasparino cleared a height of 13’5.25″ in the vault on Friday, moving her ahead of teammate Lauren Terstappen for first place in the Tiger record books. She and her teammates return to action next week for the Jim Click Invitational, a scored meet held in Tucson, AZ.