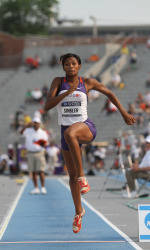 Sinkler, a native of Stafford, VA, had a strong start to her final season in a Clemson uniform. She returned for the first time since the 2011 NCAA Outdoor Championships and won the long jump and triple jump at the UCF Invitational in Orlando, FL last weekend. On Friday, she won the long jump with a mark of 20’5.25″/6.23m. On Saturday, she triple jumped 43’0.5″/13.12m on her final attempt to grab the victory over teammate Jasmine Brunson.

Sinkler’s long jump mark ranks No. 4 nationally according to the Track & Field Results Reporting System (TFRRS). Her triple jump distance is atop the national leaderboard according to TFRRS. Sinkler is a six-time All-American and seven-time ACC champion as one of Clemson’s most decorated women’s track & field athletes in history.