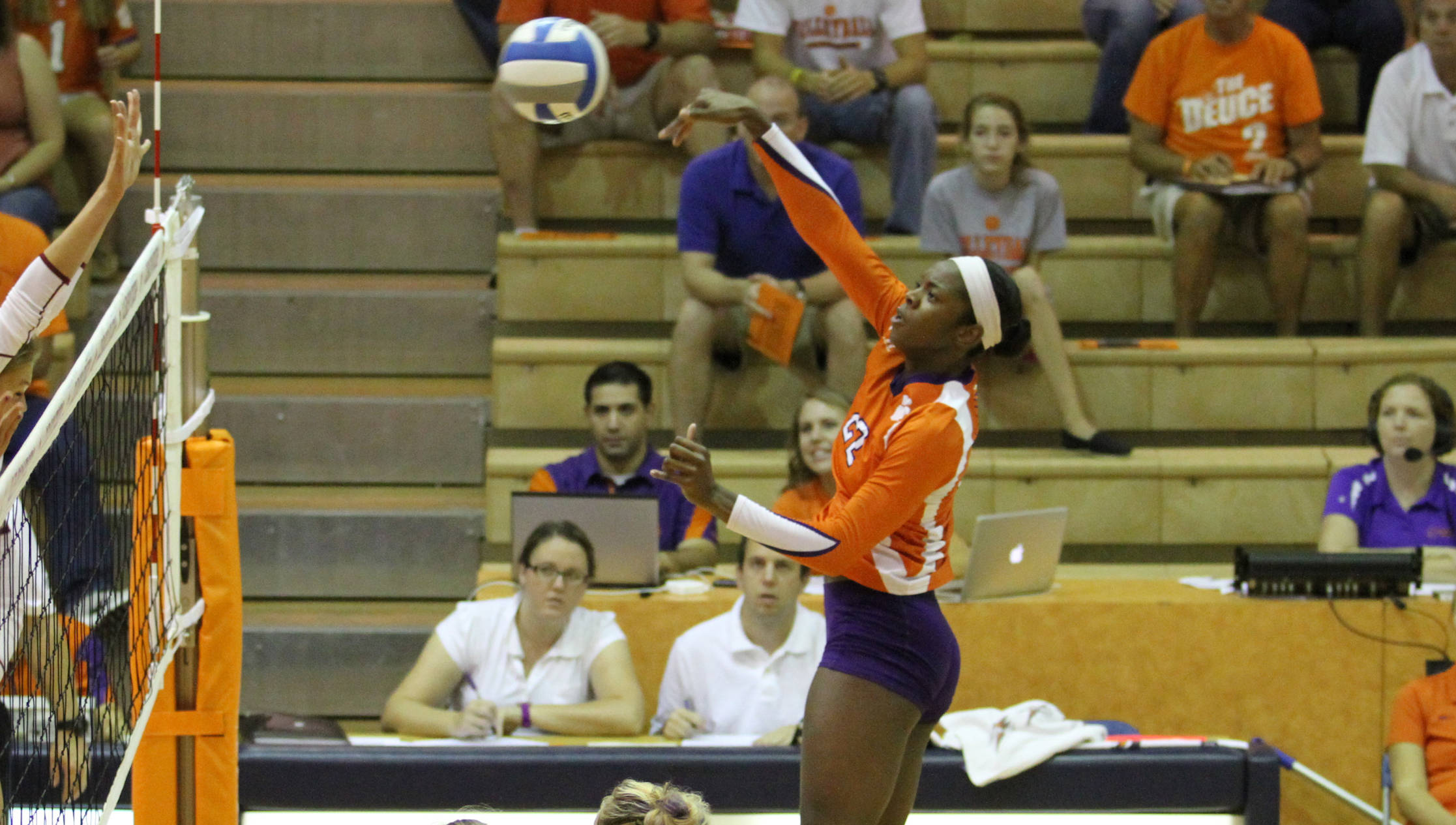 The match had 31 tie scores and 12 lead changes through three sets, which left Tech ahead, 2-1 entering the fourth. Clemson responded, taking a 6-0 lead in the fourth, and never trailed in either the fourth or fifth sets en route to their third five-set win of the season. The win was key for Clemson’s NCAA tournament hopes, as the Hokies entered ranked 47th in the RPI.

Simmons’ 25 kills were a career-high and the most for any Tiger since Sandra Adeleye posted 27 against Miami last season. Adeleye had 17 kills on Friday night, while Serenat Yaz added 13 kills and 15 digs, along with a pair of aces, in the match.

Hannah Brenner led Clemson to .264 hitting, and added 51 assists and 16 digs for the Tigers, whose 69 kills were a season-high. Clemson was superior on both ends of the floor on Friday, also holding Tech to .120 hitting in the match.

Virginia Tech took 209 swings, the second-most by an opponent this season, but found the floor on just 57 of them, while committing 32 errors and hitting into 12 blocks. Clemson came up with 96 digs, led by a season-high 27 from Natalie Patzin, who is pushing for third on the all-time school list. Patzin also added a career-best seven assists.

Alexa Rand was another big reason behind Clemson’s solid defense, getting in on nine of Clemson’s 12 blocks. She now has 596 career blocks, and is trying to become only the third player in school history to surpass the 600 career block milestone.

No Hokie was able to hit higher than .167 in the match. Virginia Tech entered the match ranked second in the ACC in team hitting at .263, and had three players among the top ten in the league in hitting percentage. Samantha Gotling (18 kills) and Jennifer Wiker (16 kills) led Virginia Tech’s attack, which did post seven aces in the match.

Virginia Tech’s two set wins came by a combined four points, winning the first set, 26-24, and the third, 29-27, which should have deflated the Tigers. Instead, Clemson came out in each of the sets following a loss, and posted 25-15 and 25-17 wins in the second and fourth sets, before taking a 10-3 lead in the fifth and holding on.

Simmons had six kills in 11 swings in the fifth to lead the Tiger offense. Clemson raced out to a 10-3 lead before Virginia Tech got to within three at 12-9, forcing Clemson’s second timeout. Simmons punished the next ball to go up 13-9, and Rand and Kristin Faust combined for a block to set up match point. Victoria Hamsher put her attack into the net to seal it for the Tigers.

After playing Virginia Saturday, Clemson will play their final five matches at home, with NC State and North Carolina next weekend.